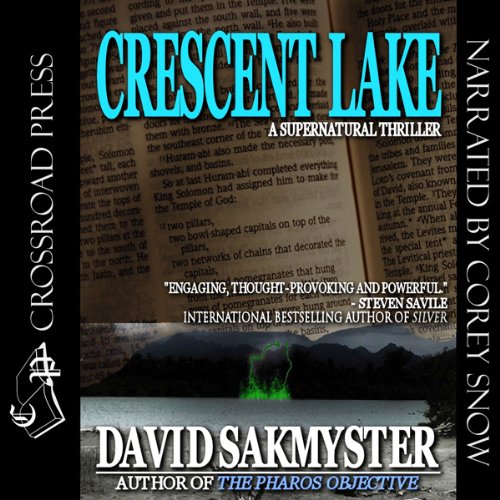 What if your darkest sins materialized, seeking your annihilation? And what if your only salvation was to accept the touch of forgiveness from someone who could then claim your soul? This is the terrifying power Reverend Zachary Bright has over the townspeople of Silver Springs, Washington.

In Crescent Lake, Nick Murphy, a mob informant trying to atone for his crimes - and his role in a tragic accident that killed his wife and daughter - is placed into a witness-relocation program and sent to a small, scenic town believed to be the perfect hideout. But from his first day in Silver Springs, he finds himself in a different kind of life-and-death struggle, one where his past sins have come back to haunt him. He and FBI agent Audrey Harper are quickly caught up in supernatural events and bizarre miracles, and must contend with a town besieged by religious fanaticism – and an enemy that can raise the dead. And while a ruthless mob assassin closes in on Nick’s location, Reverend Bright plans to expand his dark ministry across the country.

Nick and Audrey must overcome their own dredged-up sins and then rally the few residents that have somehow resisted the Reverend’s influence. They will make a last stand against the whole town; but first, they must confront what rests at the bottom of the nearby lake - the source of the Reverend’s unholy power.