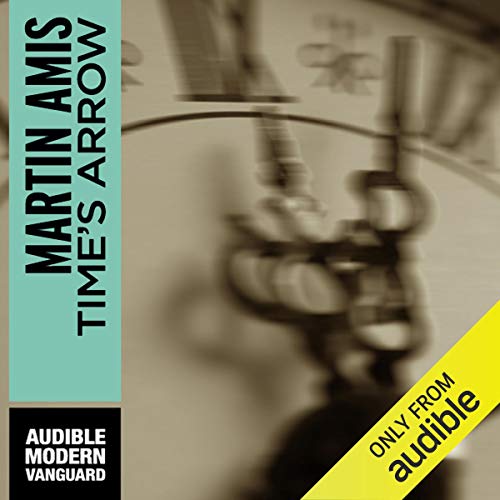 Martin Amis turns to a tricky literary conceit to tell the story of an ex-Nazi, Dr. Tod T. Friendly. Friendly is possessed of two separate voices, one running backward from his death, the other running forward, fleeing his unsavory past.

As an added bonus, when you purchase our Audible Modern Vanguard production of Martin Amis' book, you'll also get an exclusive Jim Atlas interview that begins when the audiobook ends.

"For decades, writers have been striving to comprehend the Holocaust, and while its horror remains indelible, readers may wonder if there is another way of going over this relentlessly examined ground. In this swift, incisive little book, Amis succeeds in rendering the shock of the Holocaust wholly new by traveling backward in time....Amis's device, which at first seems merely a clever conceit, is handled so skillfully that living backwards becomes not only natural but a perfect metaphor for the Nazis' perverted logic. If he can't finally probe to the bottom of a mind that embraces atrocities, Amis has nevertheless written a thought-provoking, compelling book." (Library Journal)
"A novel that seems to have been written with the term 'tour de force' in mind . . . Amis's radical rethinking of time . . . brings the abomination of the Holocaust home to the jaded late-20th-century reader in a way that few conventional novels could." (Village Voice, Literary Supplement)
"Splendid . . . bold . . . gripping from start to finish." (Los Angeles Times Book Review)

Martin Amis loves to show off. He’s like a precocious magician who enjoys showing you a trick so complex, you still marvel at exactly how he pulled it off. Amis’ novel Time’s Arrow precisely fits this description, and narrator Graeme Malcom is the perfect choice to pull off performing Amis’ tour de force.

Malcom’s haughty English accent brings just the right combination of condescension and child-like wonder to Amis’ playful prose. His performance, especially in the first half of the book, is reminiscent of Jeremy Irons’ pitch-perfect reading of Vladimir Nabokov’s Lolita. He sounds annoyed and repulsed by the crude characters surrounding him, and yet also completely captivated by everything he sees and hears. Malcom makes Amis’ seemingly simple sentences soar, illustrating exactly why critics regard Amis as one of the best writers of his generation.

Time’s Arrow seems like a simple trick. The book starts at the end of Dr. Tod T. Friendly’s life and goes backwards. Harold Pinter’s powerful play Betrayal uses a similar storytelling strategy to chronicle an adulterous affair. This time, Amis raises the stakes beyond mere sins of passion to describe in detail the casual cruelty of a Nazi prison camp doctor. There’s another twist as well. Amis astutely decides not to have Tod T. Friendly as narrator. Instead, a voice in Friendly’s head that’s completely unaware that time is running backwards tells the story. This unnamed voice (perhaps Friendly’s subconscious) believes the end is the beginning. As a result, everything that happens comes as a surprise to the narrator.

The more you listen to Time’s Arrow, the more you’ll be amazed by Amis’ brilliance. And based on his always entertaining interviews, Amis seems to know just how clever he can be in one book after another. Then again, Houdini was one of the greatest self promoters ever, and everyone was still mesmerized by his astounding illusions. —Ken Ross