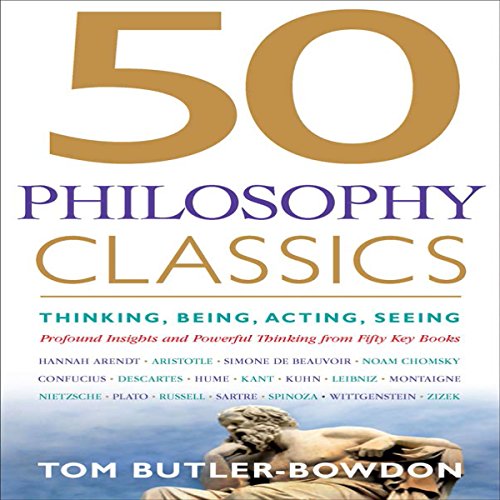 From Aristotle to Wittgenstein and Zizek, 50 Philosophy Classics provides a lively entry point to the field of philosophy. Analyses of key works by Descartes, Schopenhauer, Hegel, Heidegger, and Nietzsche also show how philosophy helped shape the thinking and events of the last 150 years. The list also includes 20th century greats including de Beauvoir, Foucault, Kuhn, and Sartre along with contemporary philosophy, including the writings and ideas of Peter Singer, Noam Chomsky, Harry Frankfurt, and Nassim Nicholas Taleb.

50 Philosophy Classics explores key writings that have shaped the discipline and impacted the real world. From Aristotle, Plato, and Epicurus in ancient times to John Stuart Mill's manifesto for individual freedom and Ralph Waldo Emerson's struggle to understand fate as person versus the universe. Most notably, Butler-Bowdon takes listeners beyond the 20th century to introduce contemporary thinkers like Slavoj Zizek, who suggests that the fight for food and water, a biogenetic and social revolution, indicate the apocalyptic end of global liberal capitalism.

"This book explains and discusses briefly, but with remarkable lucidity, some of the ideas of fifty philosophical thinkers from ancient times to the present-day. Complex views on a whole range of important and enduring issues are made accessible to the general reader.... The book is enjoyable and instructive." (C.L. Ten, professor of philosophy, National University of Singapore)