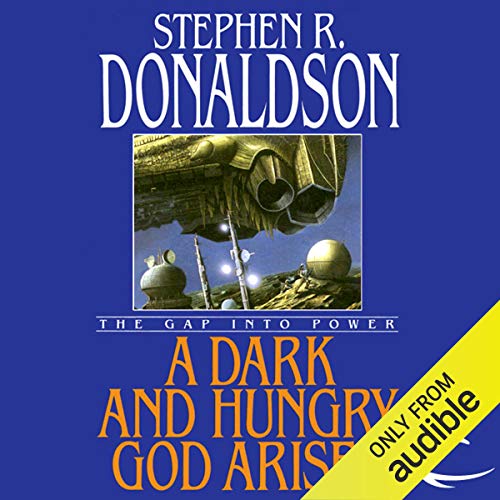 A Dark and Hungry God Arises: The Gap into Power

A master storyteller, Stephen R. Donaldson established a worldwide reputation with his unforgettable, critically acclaimed fantasy series The Chronicles Of Thomas Covenant. Then, with The Real Story and Forbidden Knowledge, he launched a thrilling new science fiction series. Now the galactic epic continues as humanity struggles against the forces of ultimate evil - and its own dark nature.

The stage is set for confrontation at Billingate - illegal shipyard, haven for pirates and brigands, where every vice flourishes and every appetite can be sated. Gateway to the alien realm of the Amnion, the shipyard is a clearinghouse for all they require to fulfill their mutagenic plans against humanity. It is here that the fate of Morn Hyland is to be decided amid a kaleidoscopic whirl of plot and counterplot, treachery and betrayal. As schemes unravel to reveal yet deeper designs, Morn, Nick, and Angus' lives may all be forfeit as pawns in the titanic game played our between Warden Dios, dedicated director of the UMC Police, and the Dragon, greed-driven ruler of the UMC.

Here, the future of humankind hangs on the uncertain fortune of Morn Hyland in a daring novel of epic power and suspense, relentlessly gripping from first page to last.