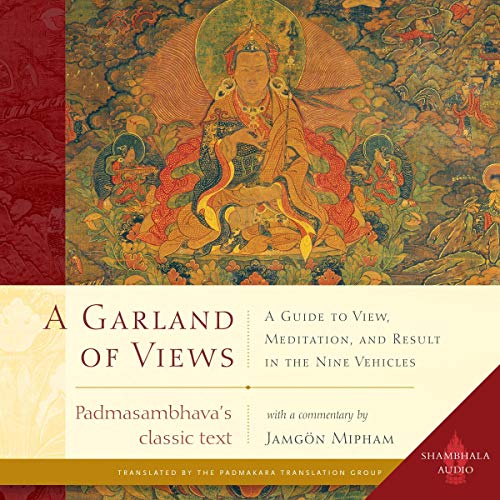 A Garland of Views

A Garland of Views presents both a concise commentary by the eighth-century Indian Buddhist master Padmasambhava on a chapter from the Guhyagarbha Tantra on the different Buddhist and non-Buddhist philosophical views, including the Great Perfection (Dzogchen), and an explicative commentary on Padmasambhava’s text by the 19th century scholar Jamgön Mipham (1846-1912).

Mipham’s commentary is the one most commonly used to explain Padmasambhava’s teaching. Mipham is well known for his prolific, lucid, and original writings on many subjects, including science, medicine, and philosophy, in addition to Tibetan Buddhist practice and theory.

"This unique and classic text composed by Guru Padmasambhava has been transmitted, studied, and revered by Tibetans for centuries. A pithy guide to the View and the nine spiritual vehicles, culminating in Dzogpachenpo, the Great Perfection, it is accompanied by indispensable clarifications from the peerless Mipham Rinpoche. It must be read by anyone seeking a deeper understanding of the ancient tradition of Tibet’s extraordinary Buddhist wisdom." (Sogyal Rinpoche, author of The Tibetan Book of Living and Dying)

"A Garland of Views is a great manual for traveling the Dzogpachenpo path of the early Translation School of Tibetan Buddhism. With detailed insights, it elucidates how all the yanas are stepping-stones to the summit of Great Perfection, the realization of Samantabhadra. This is the way of great teachers such as Guru Padmasambhava, Vimalamitra, and Longchenpa, and what they have taught throughout history. I am delighted that Padmakara has made a text like this available to Western audiences so readers can comprehend the extensive teachings on the Dzogpachenpo lineage. It will greatly serve the transplantation of buddhadharma in the West." (Dzigar Kongtrül Rinpoche, author of It’s Up to You)