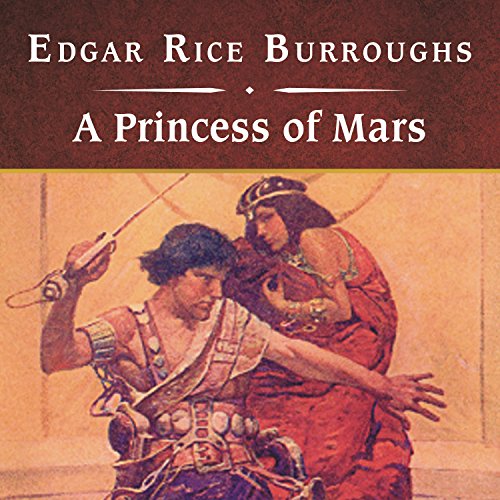 A Princess of Mars

Ex-confederate army captain John Carter finds himself unwittingly transported to Mars, while fleeing Apache Indians. This new world is populated by a race of monstrous Martians, whose culture is based on the ability to fight for their race. Fortunately for John, the gravitational difference between Mars and Earth has endowed him with the strength that he will need for survival on this hostile planet. John Carter battles ferocious Martian creatures, but gains the respect and friendship of the Barsoomians. He also encounters the beautiful Dejah Thoris, Princess of Helium, and earns her everlasting devotion.

The first in Burroughs' 11-volume series of the adventures of John Carter. The Mars series is a blend of sci-fi and romantic adventure - and The Princess of Mars was Burroughs' first published work.

A century after its serial publication in a magazine, this novel has found new popularity with the film "John Carter." Narrator Scott Brick brings to the production a wealth of experience with science fiction tales that have long explicatory passages and many battles. As the first-person narrator to whom John Carter told his story, Brick recounts the adventures of the hero, who starts out as a prospector in Arizona. When John Carter is pursued by Apaches, he takes refuge in a cave, is overcome by a gas, and wakes up on Mars. Once there, he becomes one of the green Martian horde, falls in love with a princess, and hurls himself from one exploit to another. Brick's introspective delivery adds dimension to this popular example of interplanetary pulp fiction.