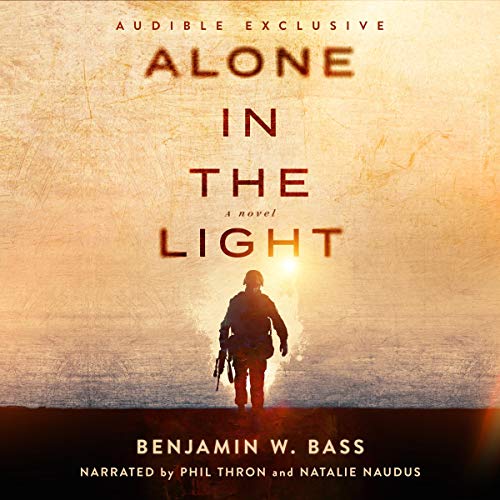 Alone in the Light

Two years and 6,000 miles away from the explosion that took his leg, Josh Carpenter struggles to reclaim his former life as a college student.

Mary Fischer, a civilian for the first time in years, strikes out on her own to create a new, independent life away from the army and her controlling mother.

The last time Josh saw Mary, his National Guard unit was leaving Kuwait, headed north to the war. The last time Mary saw Josh, she watched as his unconscious body was rolled onto a plane bound for a hospital in Germany.

As they navigate their new lives, Josh and Mary come ever closer to a reunion that has the potential to heal the traumas of war...or compound them.

"The first thing that grabs the reader is the use of two first-person narrators, which allows us to see and feel opposing perspectives of the story. These narrators are equally strong and emerge as equally developed characters. Yet the narrator voices are distinct and believable with one male and one female. They are so believable we must remind ourselves this is fiction. Through the male narrator Josh, the author allows us to experience his PTSD without frill or melodrama. It’s not pretty, it’s sometimes brutal, but it’s real and alive in our face. Through the female narrator Mary, we experience the impact of Josh’s new reality on others. It’s also not pretty, but it’s so human that we relate and cry and get mad and become irritated just as Mary does.

"Supporting characters are well done also: Josh’s brother Bill who loves in spite of Josh’s spite, the fragility of friend Tim, the quirkiness of temporary girlfriend Carrie, the coldness of the moms, the warmth of Mary’s dad, the inhumanity of Adam the dick and even the concern of Charlotte the art teacher. Every character in the story brings depth to the story and adds a different perspective, adds complexity.

"The next thing that grabs us are the worlds colliding. The author starts with how the world changes for Josh and Mary after Josh loses his leg. Then we see how the world changes for people after seeing combat and how their former worlds back home do not. We see how the military world, especially that of a wounded vet, careens into the civilian world of holiday dinners and parties. We come to live in the internal worlds of Josh and Mary as they struggle to make sense of what is and is not happening. This collision of worlds is perfectly accentuated by the shifting back and forth between the voices of two narrators, the time of both past and present, and the locations of Indiana and Iraq. Sometimes this shifting is confusing. The author uses subheadings to help us keep track of who is talking and where we are.

"The craft of the story is subtle, simple beauty. The Prologue is sheer poetry with its details of the mundane, to the horror of getting blown up, to the emergence of a new world: 'I open my mouth and it is filled with the saltwater tang of the blackness flooding me. I feel like I am drowning. I fear I am dead. There is a light. It is everywhere. It is all around me. I am alone.' This imagery of light emerges throughout in different contexts.

"The writing remains honest, straightforward, and fluid - no straining after metaphors, no overwriting. This might be one of the best books about a post-traumatic reaction. It's a powerful story, compelling, wrenching, and finally uplifting." (Gail Summers, Military Writers Society of America (MWSA))