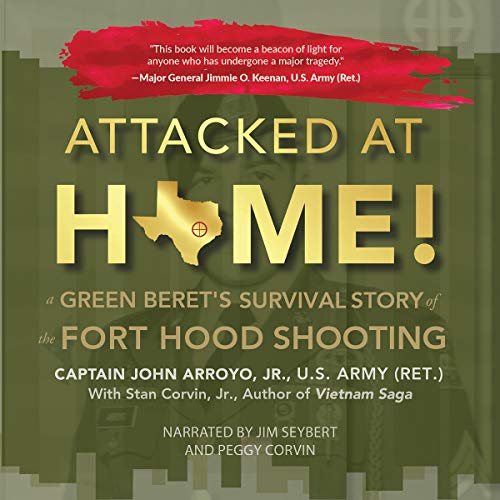 The moment I was shot, I froze in disbelief. I wasn't sure what had just happened, I remember thinking, "Am I shot?" I didn't feel any pain, but the impact felt as if I was hit in the chest with a baseball bat. However, instantly, my worst fears were confirmed when I saw massive amounts of bright red blood flowing through my fingers and down my chest.

Attacked at Home: A Green Beret’s Survival Story of the Fort Hood Shooting is the amazing story about second Lt. John M. Arroyo, Jr., who, on April 2, 2014, was shot in the throat and neck by another soldier who then went on to kill four soldiers, including himself, and wound 16 others.

Attacked at Home is also about John’s life beginning with his childhood in Southern California, including his time spent as a tattooed member of a violent street gang, a hopeless teenage drug addict, and then his enlistment in the U.S. Army where he ultimately becomes a Special Forces Green Beret and highly decorated officer after serving two tours of duty in Afghanistan and one in Iraq. The audiobook also tells how he uses his Christian faith to protect himself and his fellow Special Forces “Operators” while deployed to the Middle East and then relies on it to recover from the massive wounds he sustained after being shot at Fort Hood, Texas

"John Arroyo is a paradox. He has every reason to be angry and filled with revenge, depression, and regret because of being attacked on Fort Hood. Yet, as his book unravels the details of an active shooter, you will see the unraveling of God’s amazing grace in the face of complete hopelessness." (Dave Roever, Minister, Motivational Speaker, Author, President of Roever Foundation.)