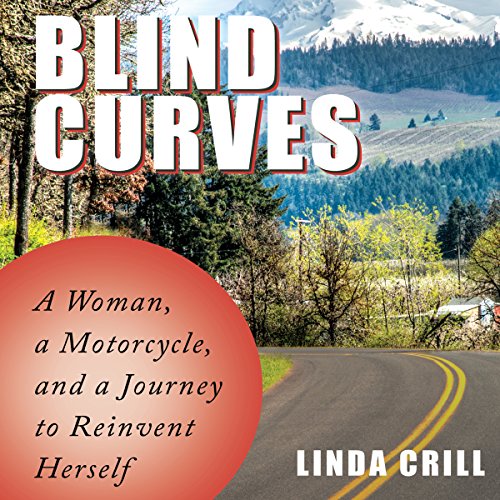 After months of following one-size-fits-all advice for a 57-year-old widow, Linda Crill is still miserable, until she makes a rebellious spur-of-the-moment decision: she trades her corporate suits for motorcycle leathers and commits herself to a 2,500-mile road trip down America’s Pacific Northwest coast on a Harley. The problem: she doesn’t know how to ride and has only 30 days to learn.

Four short weeks later, Linda joins two men and a woman for a white-knuckled, exhilarating road trip along the west coast from Vancouver, Canada, to the wine country of Mendocino, California. Along the way she encounters washed-out mountain roads, small-town hospitality, humming redwoods, and acceptance from gentle souls who happen to have tattoos and piercings.

By heading into the unknown - the blind curve - she faces her fears, tests old beliefs, and discovers not only a broader horizon of possibilities to use in building the next phase of her life, but also the fuel to make it happen.

Funny, irreverent, and extraordinarily honest, it’s the perfect listen for people looking for ways to reinvent themselves, and anyone asking: "What now?"