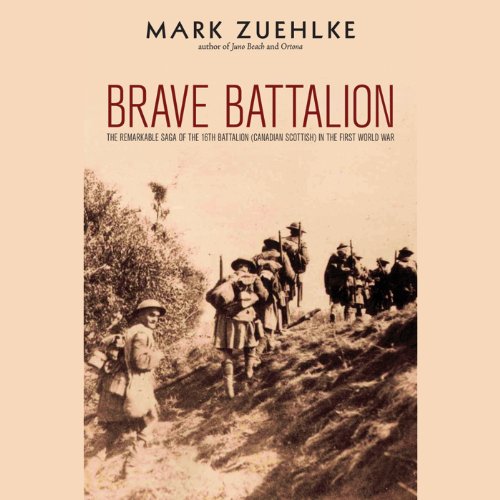 This is the story of the average Canadian who volunteered for the Canadian Expeditionary Force told through the lens of one battalion - the 16th Battalion (Canadian Scottish) of the 1st Canadian Infantry Division. This Highland Regiment fought in the Ypres Salient and in the Somme, at Vimy, Passchendaele, and Amiens. It suffered the first gas attack; its ranks were decimated as it fought at virtually every major battle in the European theatre.

From the declaration of war to the cessation of hostilities, Zuehlke follows the battalion from marshalling and training in Canada, across the Atlantic to England, and then landing in Europe. In graphic detail he takes the reader into the trenches and onto the shell-pocked battlefields, through assaults on ridges and wooded valleys. Brave Battalion is not a sweeping history of the conflict. It is rather the story of war on the ground as told through the accomplishments of a band of brothers - the Canadian Scottish - who came to represent the best of what Canada sent into battle.

Brave Battalion is a preeminent example of why Mark Zuehlke has been hailed as one of Canada's foremost military historians. Telling the story of the Canadian Scottish 16th Battalion of the 1st Canadian Infantry Division during the First World War, Zuehlke's informative descriptions, coupled with the authoritative performance of Thomas Fawley, bring the listener into the trenches and across the battlegrounds from Canada over to England and, eventually, Europe. Fans of nonfiction and WWI lore will be thrilled by Zuehlke's narrative of the defeats and accomplishments of these brave men.