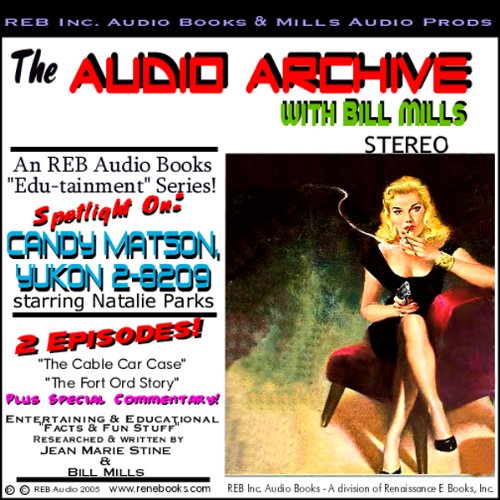 Candy Matson, Yukon 2-8209, which ran from 1949-1952, is considered the best of radio's female private eyes. Bright, sparkling and witty, Candy Matson (whose home was "on Telegraph Hill overlooking Monterey Bay" in San Fransisco) features the sharpest dialogue this side of the William Powell-Myrna Loy "Thin Man" movies.

Candy was as dogged a man-hunter as any of her hard-boiled male counterparts, and just as quick with a wisecrack in the face of danger. As Jack French, author of Private Eyelashes: Radio's Lady Detectives, puts it, "Threats, assaults, and even bullets would usually produce a caustic, but clever, response from this blonde sleuth."

The show boasts one of the most unique crime fighting duos in radio history: Candy's sidekick is the cultured, flamboyant (and possibly 'light-in-the-loafers") Rembrandt Watson. Watson was a true friend dedicated to Candy and Candy was a true detective dedicated to fighting crime, solving mysteries, and collecting crisp cold cash from clients.

This special audio double-feature showcases two classic episodes, "The Cable Car Case" and "The Fort Ord Story", complete and uncut, plus special commentary researched and written by old time radio fans Jean Marie Stine and Bill Mills, who describe the show's history and discuss the history of female sleuths on radio, biographical info on Parks and Masters, behind-the-scenes stories and even more about the making of radio's most delightful detective series!