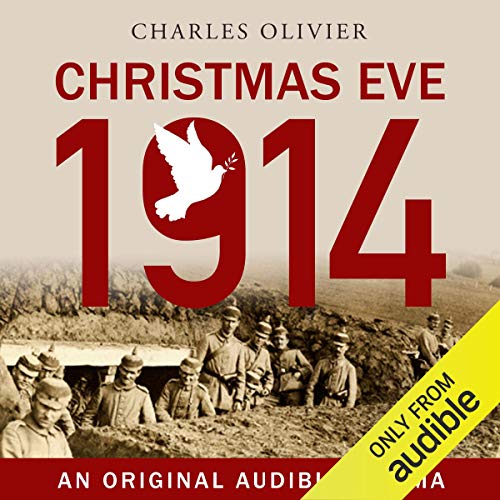 "Drawing from historic events and written especially for audio by two-time Emmy Award winner Charles Olivier, this stellar production transports the listener behind British lines on the Western Front during the first Christmas of WWI, when, of all things, German and English soldiers declared an unofficial truce to bury their dead, sing carols, and give thanks. The cast's excellent naturalistic acting and superb dialogue bring out the human side of a conflict in which the enemy lay entrenched only a few hundred yards away. Spot-on sound effects and motion-picture-style original music create sonic depth and atmosphere. Riveting, touching, and timeless, this production is destined to become a family favorite at Christmas for years to come. Winner of AudioFile Earphones Award, 2016." (AudioFile magazine)

This mesmerizing audio drama takes you to the dismal trenches of World War I. It is here, under the constant threat of exploding shells and artillery, that British and German soldiers live in deplorable conditions. Braving the merciless cold and crushing exhaustion and hunger, the men conduct patrols and fight, often to the death, to advance mere inches in the frozen No Man’s Land that lies between them.

But on Christmas Eve, the Western Front gives way to a miracle of grace, as soldiers from both sides emerge from their trenches to greet each other, share their meager rations, and bury the dead for an unofficial and temporary truce. Drawing upon the unforgettable true story of history’s most transcendent ceasefire, this Audible Original, a finalist for the 2016 Audie Award for Best Audio Drama, commemorates an astonishing moment of peace—and celebration of man’s capacity for kindness—in the midst of total war. A full cast performance of a heart-wrenching script written by Emmy Award-winner Charles Olivier and produced by Dawn Prestwich (The Killing), Christmas Eve, 1914 is the perfect reminder of how holiday hope can be found in the unlikeliest of places. At the story’s end, listeners will also enjoy a performance of the classic carol, "Il Est Ne" by Tom Tom Club.