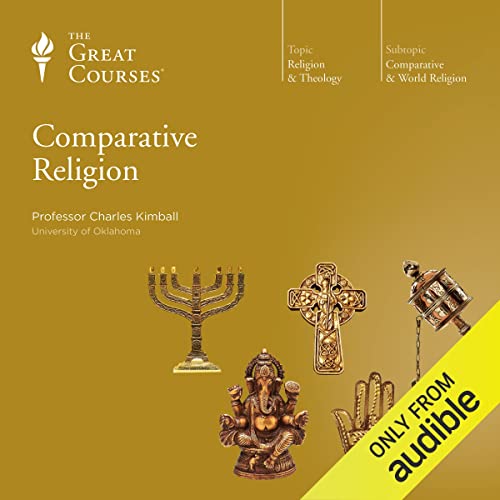 Get a solid working knowledge of the spiritual beliefs that unite and divide us - as well as the perspective from the other side of these divisions. These 24 lectures offer you an opportunity to gain a solid grasp of the key ideas of religion itself - the issues that repeatedly surface when you look at any faith's beliefs, practices, and organization. Using five major religions - Judaism, Christianity, Islam, Buddhism, and Hinduism - as illustrations of how religions can address the same core issues in parallel and different ways, Professor Kimball leads you on an exploration of religion's complex and multidimensional nature. It's an exploration that can strengthen the interpersonal understanding that underlies your daily relationships, enhance your perception of events in a diverse world, and deepen your appreciation of your own beliefs and the traditions followed by others.

Using the basics of these five major religions as a starting point - and explaining those basics so that no prior knowledge is needed - Professor Kimball plunges deeply into each to reveal and clarify the essential structural components shared by all faiths. Among the aspects of faith you compare and contrast are creation myths and sacred stories, concepts of the divine, sacred texts and spaces, and religion's ultimate goals - the reasons its adherents give them such importance.

After completing these lectures, you'll be able to "see with a native eye", as Professor Kimball puts it, when you wonder why followers of a given religion believe or act as they do.