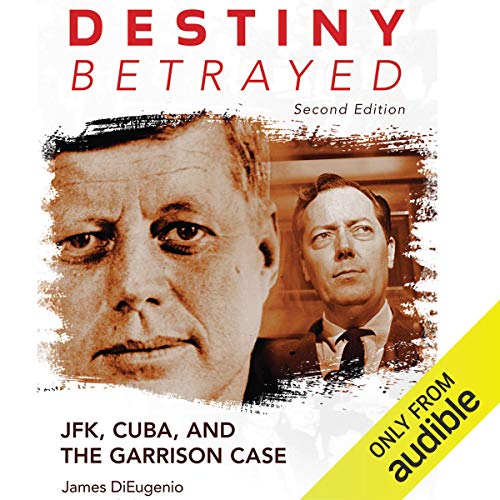 If you thought you already knew everything there was to know about the Kennedy assassination, think again.

If you enjoyed the chilling experience of In Cold Blood and were at the edge of your seat while watching Oliver Stone’s JFK, you’ll love this investigative look into all the facets of one of the top conspiracies of the 20th century and beyond. DiEugenio, who has spent decades researching the Kennedy assassination, takes both an analytical and conversational approach to his fascinating exploration of the pivotal historical events and scandals surrounding that day.

Twenty years after the first edition of Destiny Betrayed, DiEugenio is back with his ever-expanding investigation into the life and death of JFK. But this is no simple reissue. It is a greatly revised and expanded version of the original book, including updates on all the topics it introduced back in 1992. DiEugenio has used the declassification process of the Assassination Records Review Board (ARRB) to obtain the most current information on topics like the Garrison investigation and Clay Shaw; the newly exposed fallacies of the Warren Commission; U.S.-Cuban policy from 1957 to 1963; Kennedy's withdrawal plan from Vietnam; Kennedy's challenge to the Cold War consensus in 1961, and where those ideas originated; the ARRB medical inquiry demonstrating conspiracy and cover up; and the problems with the investigation of the Kennedy case. DiEugenio’s primary focus is on the Garrison inquiry, the New Orleans aspects of the Kennedy murder investigation, and the revelatory new information that bolsters Garrison’s case and has been withheld from the public.

All of this and more is contained in the narrative of this complex crime, with twin focuses on the victim, John F. Kennedy, and the investigator, Jim Garrison.

Few events in American history are as shrouded in mystery and controversy as the assassination of President Kennedy. James DiEugenio's peerless work transcends conspiracy theory labels by providing an impeccably researched and skillfully written analysis of this watershed event. Like Jim Garrison, DiEugenio displays an unrelenting commitment to uncovering the truth, and leaves no stone unturned in his pursuit of it.

Paul Neal Roher's distinguished, astute performance underscores the gravity of the subject at hand, and his dynamic range - showcased by his effortless shifts into Kennedy's Boston accent - makes for an addictive and enthralling listen.