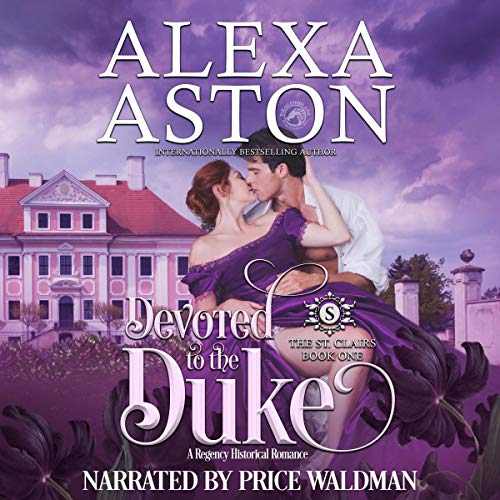 Devoted to the Duke

A lady with a dark secret refuses to marry the man of her dreams in order to protect him. But will he let her?

After returning to London from his Grand Tour, serious-minded Jeremy St. Clair, the Marquess of Sather, attends a ball and meets a luminescent beauty who draws him out of his shell. They share a searing kiss - her first - and though he never planned to wed, Jeremy desires to make this young woman his. But his life takes an unexpected turn when he leaves her that night.

With his father’s death, Jeremy becomes the new Duke of Everton, and learns the former duke has left the St. Clair family almost penniless. Jeremy spends five years restoring the family fortunes but yearning for the auburn-haired beauty who understood him like no other before. One night with her was all he needed to remember her forever.

Lady Catherine Crawford has been inundated with offers of marriage and hasn’t cared for any of her suitors. She longs for love, seeing how devoted her parents are to one another. When she meets Lord Sather, she believes they are meant to be together. Yet, her world collapses that night in a horrific carriage accident, killing her mother and seriously injuring both Catherine and her father. She retreats to their country estate and, once healed, cares her father and mothers her younger sister, Leah. But she's never forgotten about Lord Sather...and their kiss.

When Jeremy and Catherine meet years later, the sparks are still present - though Catherine has recently learned a dark secret about her past, making it impossible to wed Jeremy without ruining his reputation. Through a misunderstanding, the town believes them to be engaged, and she goes along with the engagement, hoping to find a way to break it.

Will Catherine’s secret be revealed and will Jeremy accept her if it becomes public knowledge?

Heartbreak is in their stars...or salvation? Find the answer in best-selling author Alexa Aston’s first book of The St. Clairs, Devoted to the Duke. Each book in The St. Clairs Trilogy is a stand-alone story that can be enjoyed in any order.