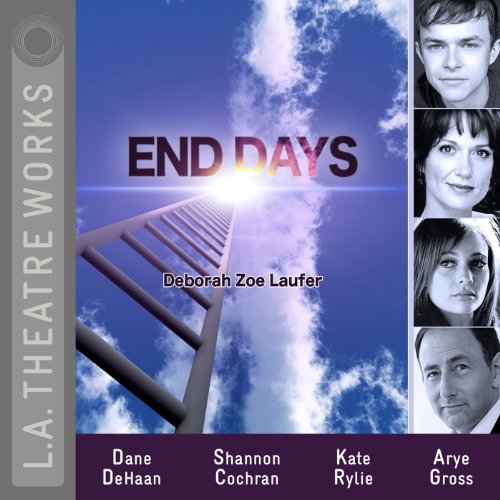 In Deborah Zoe Laufer's End Days, a suburban family is undergoing a spiritual crisis following the September 11th attacks. Sylvia Stein has turned to Christianity to save her disaffected husband Arthur and her rebellious teenage daughter Rachel. But as Sylvia races around preparing for the Rapture, Rachel is learning that there are more things in Heaven and Earth than are dreamt of in her philosophy.

Kenneth Houston as the Bully

Directed by Michael Hacket. Recorded at The Invisible Studios, West Hollywood in 2010.

End Days is part of L.A. Theatre Works’ Relativity Series featuring science-themed plays. Major funding for the Relativity Series is provided by the Alfred P. Sloan Foundation to enhance public understanding of science and technology in the modern world.

How would you spend your last few days if you knew the Apocalypse was coming on Wednesday? For rebellious teenager Rachel Stein - a girl whose father hasn’t gotten dressed since 9/11, whose mother has recently and impulsively converted to Jesus, and who herself is being wooed by her 16-year-old neighbor and Elvis impersonator, perhaps the End of Days can’t come soon enough.

This uproariously funny, quirky, and poignant play is performed by a full cast that includes several veterans of television, film, and stage. Perhaps fans of the off-beat film, Juno will appreciate the similar aesthetic of End of Days.