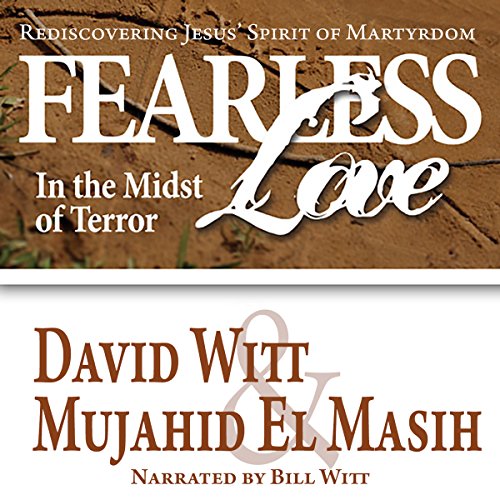 Fearless Love in the Midst of Terror

If you are among those who are curious about the basic teachings of Islam, how God gives faith that overcomes the fear of suffering and death, how to reach out to Muslims, and how a relationship with Jesus Christ brings us to a growing fearless love, then listening to this audiobook by authors David Witt and Mujahid El Masih (narrated by Bill Witt) will raise some important questions in your mind as well as provide significant answers.

Does the violence in our world and within Islam among fundamentalist Muslims disturb you? Are you perplexed that the adherents of a religion claiming to be peaceful can act so destructively and claim to do so in the name of Allah? Are you angered about the terrorism and suicide bombs by the so-called martyrs?

Are you aware that martyr is an important ideal in both Islam and Christianity but that the meanings of the word in both religions are diametrically opposed? One of the authors' purposes is to contrast the martyrdoms of the two faiths and to invite Muslims to seriously consider which act of martyrdom offers the greatest hope for peace to them and all the people of the world: the one that is acted out with hatred toward one's enemies or the one that demonstrates love toward one's enemies by dying in the pursuit of bringing them love.

For Christians, it is the authors' hope that they will gain a greater understanding of the dark hopelessness of Islamic martyrdom in contrast with the bright hope they have to share by living with a spirit of Christlike martyrdom - fearless love

About the authors and narrator:

Dr. Mujahid El Masih lived in Pakistan until 1997. While growing up he studied Islam for more than 14 years in Pakistani schools and universities. He trained as an officer in the military. Through Qur'anic teachings, he was taught to hate Israel, Christians, and all non-Muslims. He was very passionate about being a martyr for his country and religion until he came to know that Jesus is the way, the truth and the life. His faith in Christ released him from hate and gave him the power to love.

Pastor David Witt is founder and CEO of Spirit of Martyrdom Ministries. An international speaker and author and associate representative for The Voice of the Martyrs, David has traveled to over 40 nations.

Bill Witt, the narrator of this audiobook, is David's father. A retired pastor of 40 years, he shares in the passion of his son and Mujahid to reach out to Muslims and share how a relationship with Jesus Christ brings us to a growing fearless love. His pastoral heart is evident as he narrates the many dramatic stories of courageous Christians, which will give you encouragement, inspiration, and hope!