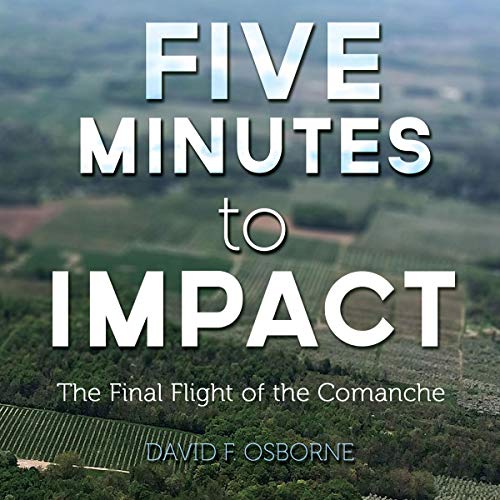 Five Minutes to Impact: The Final Flight of the Comanche

"You will stop breathing. Your heart will race. You will whisper, "Dear God, no!" Five Minutes to Impact is every traveler's nightmare, yet simultaneously an inspiring story of supernatural peace in the darkest hour." ( Jim Congdon, Th.D, Sr. Pastor Topeka Bible Church, Author, Chairman of Jews for Jesus)

With these words, David F. Osborne alerted air traffic controllers his plane and passengers were in serious danger. What began as a normal business trip home from North Dakota turned, without warning, from tranquility to turmoil.

In the darkness of night, the once-powerful, single engine, Piper Comanche 260 airplane began experiencing catastrophic engine failure. Within seconds, the previously well-tuned aircraft was shaking violently putting the plane in a rapid descent while the cockpit was quickly filling with thick smoke.

With an emergency crash landing now imminent, the gripping realization that the pilot and his passengers faced almost certain death had become undeniable reality.

Five Minutes to Impact is a true story of overcoming fear in the face of unexpected crisis, understanding the providence of God in the dealings of man, and renewing our faith in His divine plan for our lives.

"This is the story of a pilot's worst fears lived out! As a private pilot myself, I caught myself mentally following the story . . . a story of a miracle landing on a dark night with seemingly nowhere to land. Dave tells the story from his perspective a faith-based worldview intertwined in every aspect of his life. I'm sure that you, like me, will not be able to put down this incredible story. If you know a pilot, give this book to her or him for an inspirational experience." (Lauren Libby, International President/CEO, TWR International)

Five Minutes to Impact is a riveting account of how David survived a traumatic event and emerged with a life-changing message. You will be inspired and challenged by his story. (Ken R. Canfield, PhD, author, International Speaker, Founder: National Center for Fathering and the National Association for Grand Parenting)

"It's one thing to be gripped by a "nail-biting" true life story you've never heard. It's another to have heard the story and still be glued to the book to the very end. David Osborne's story is truly one of divine intervention and genuine faith!" (Rosie J. William, author of Repurposed Faith, contributing author to Military Families Devotional Bible, Faith Deployed Again, and Military Wives NT, Psalms and Proverbs)

"The most important moment you and I will ever reach in life is the moment when we realize the question of our eternal destiny. On a dark, cloudy night in August of 2012, Dave Osborne was at peace, even in the face of almost certain death. This ordeal inspired Dave's thoughtful contemplation. He shares, "We don't have to live in fear of the present or the future. That was never God's plan for our life." In Five Minutes to Impact, Dave shares some of the extraordinary life lessons learned through this ordeal from his perspective as a businessman, father, pilot, and man of faith." (Lonnie Berger, author and President of Every Man a Warrior)