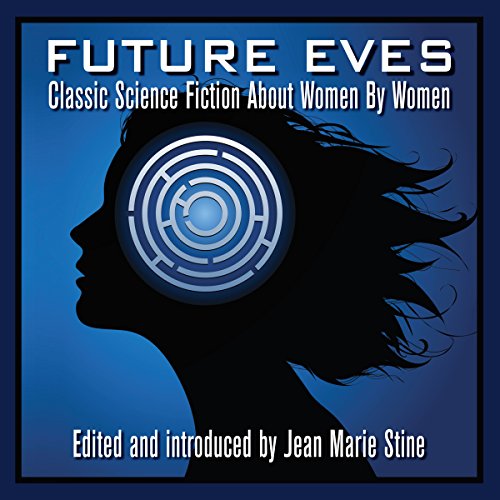 How did visionary women see the future?

Written between 1931 and 1979, these 13 stories show how different women have, in different eras, envisioned the future of their sex. Selecting its contents from lesser known writers, Future Eves presents Leslie F. Stone's novelette "The Conquest of Gola" (1931), an encounter with Earth males told from the point-of-view of an alien matriarch. So far ahead of its time, nothing like it would be attempted again in science-fiction until the work of Alice Sheldon (aka, James Tiptree, Jr.) in the 1970s.

Hazel Heald's novelette "The Man of Stone," is searingly feminist, all the more so since her heroine, like so many women of the time, takes her brutalized situation so much for granted.

In "Miss Millie's Rose" (1959), Joy Leache manages what so few male science-fiction writers of the era seemed able to do: portray a character whose psychology arises out of her future world and not our own.

Betsy Curtis' "The Goddess of Planet Delight" is a short novel in the classic mode that mixes a sociological puzzle with pointed satire, high-adventure, and romance.

Brace yourself for Djinn Faine's "Daughter of Eve", a story you will never forget, no matter how hard you try.

Plus stories by Florence Engel Randall, Evelyn Goldstein, Beth Elliot, Evelyn E. Smith, Marcia Kaimien, and others. Future Eves is fascinating to listen to, both as science-fiction and as an eye-opening view into futures past.