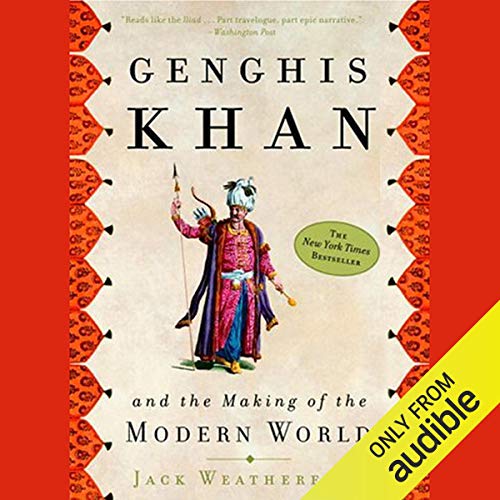 Genghis Khan and the Making of the Modern World

The Mongol army led by Genghis Khan subjugated more lands and people in 25 years than the Romans did in 400. In nearly every country the Mongols conquered, they brought an unprecedented rise in cultural communication, expanded trade, and a blossoming of civilization.

Vastly more progressive than his European or Asian counterparts, Genghis Khan abolished torture, granted universal religious freedom, and smashed feudal systems of aristocratic privilege. From the story of his rise through the tribal culture to the explosion of civilization that the Mongol Empire unleashed, this brilliant work of revisionist history is nothing less than the epic story of how the modern world was made.

"With appreciative descriptions of the sometimes tender tyrant, this chronicle supplies just enough personal and world history to satisfy any reader." ( Publishers Weekly)
"There is very little time for reading in my new job. But of the few books I've read, my favourite is Genghis Khan and the Making of the Modern World by Jack Weatherford. It's a fascinating book portraying Genghis Khan in a totally new light. It shows that he was a great secular leader, among other things." (Manmohan Singh, Prime Minister of India)
"Weatherford's admiration for Genghis and his firsthand knowledge of many of the sites important in Mongol history give this text an immediacy and a visual quality that are enhanced by Davis’s presentation. When the narrative begins to lag in its final hour or two as it moves farther from the twelfth century, Davis's crisp pace maintains the listener’s interest to the end. An informative and provocative work of popular history." ( AudioFile)