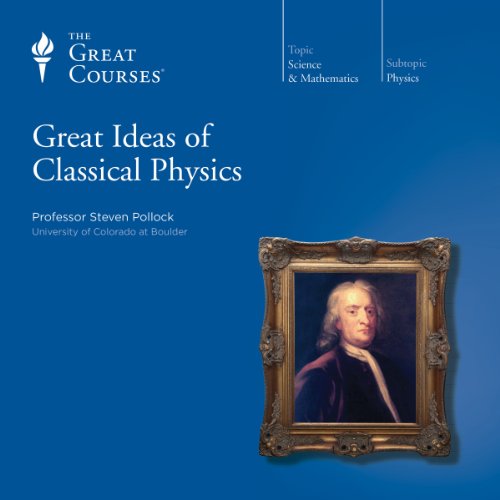 Classical physics is about how things move, why they move, and how they work. It's about making sense of motion, gravity, light, heat, sound, electricity, and magnetism, and seeing how these phenomena interweave to create the rich tapestry of everyday experience. It is, in short, the hidden order of the universe. And if it sounds complicated to you, Professor Pollock hopes you will think again - because you already know more physics than you think, In this mind-expanding series of 24 lectures, Professor Steven Pollock takes you step by step through the great ideas of classical physics, demonstrating that its landmark concepts - such as Newton's laws of motion - are intuitively understood by anyone who has ever ridden a bike, thrown a ball, slid across ice, or simply picked up an object and set it down.

Created over the course of three centuries by a series of brilliant thinkers, including Galileo Galilei, Isaac Newton, Michael Faraday, and James Clerk Maxwell, classical physics is an elegant system of ideas that connect a range of seemingly unrelated phenomena - everything from the acceleration of a car, to the orbit of a planet, to the deflection of a compass needle, to the baking of a cake, to the flow of electricity through the light bulb illuminating these words.

All these - and much more - are linked by the basic principles you will learn in these lectures - presented largely without math. Instead, Professor Pollock relies on metaphor, life experience, ordinary logic, and common sense to present the discoveries, theories, insights, methods, and philosophical points of view at the heart of classical physics.