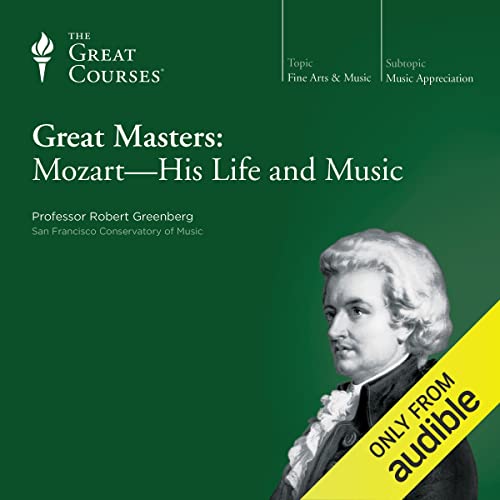 Even from the perspective of time, it is nearly impossible to grasp the full contribution made to music by Wolfgang Amadeus Mozart in his brief and glorious life. He composed his first symphony at the age of 8 and reached full artistic maturity by the time he was only 20. And when he died at the age of 35, he left a legacy of more than 600 works of brilliance - symphonies, chamber music, operas, and more - most composed during an incredibly productive 20-year period.

But even though it can well take a lifetime to fully grasp the achievement of the man described by Rossini as "the only composer who had as much knowledge as genius and as much genius as knowledge", every step of that journey toward understanding will be a joy - one you can begin with this fascinating eight-lecture series, which can serve as both a stand-alone introduction to this extraordinary composer or as the gateway to a lifetime of appreciation and pleasure.

Beginning with an examination of the many myths that surround Mozart to this day, Professor Greenberg offers not only an understanding of his music, but also a realistic view of Mozart the boy and man, from his emergence as youthful prodigy to his posthumous deification.You'll learn about his difficult and ultimately doomed relationship with his father, his troubled marriage, his relationships with luminaries like Haydn, Emperor Joseph II, and his operatic librettist, Lorenzo da Ponte, and the triumphs and disappointments that marked his career - including the astonishing and inexplicable creative recovery that enabled him to create his great Masonic opera, The Magic Flute, only months before his death.