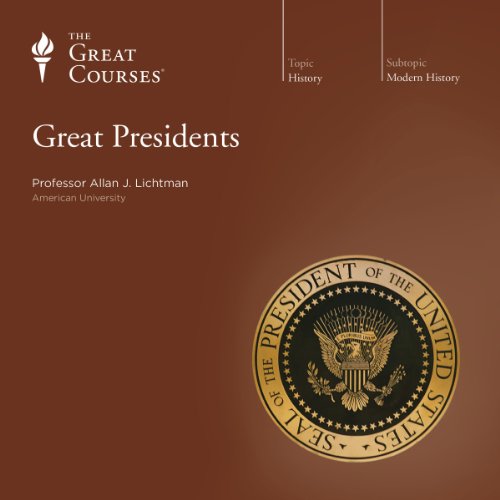 The creation of the executive branch of government was one of the most audacious decisions in American history. The story of our greatest presidents create a narrative as compelling as an historical novel, and these 48 compelling lectures look at the lives, the achievements, and the legacies of those generally considered our 12 greatest presidents: George Washington, Thomas Jefferson, Andrew Jackson, James K. Polk, Abraham Lincoln, Theodore Roosevelt, Woodrow Wilson, Franklin D. Roosevelt, Harry S. Truman, John F. Kennedy, Lyndon B. Johnson, and Ronald Reagan.

Drawing on a wealth of revealing anecdotes and inside stories, Professor Lichtman sheds new light on how the individual characters and historic decisions of each president made a major contribution to shaping our developing nation. You'll study the critical role these men played in America's founding years, Westward expansion, the struggle over slavery and the Civil War, the Great Depression, World War II, the perils of the atomic age, and more. These 12 leaders can be seen as giants of the most powerful elective office in the world. But through Professor Lichtman's eyes we see them as they really were, contradictions and paradoxes included.

These lectures give the "inside stories" from our highest office, and they reveal 12 leaders with varying styles, personalities, and beliefs, but they all had in common an unsinkable ambition, a deep affinity with the American people, and a strong inner core of guiding values and principles.