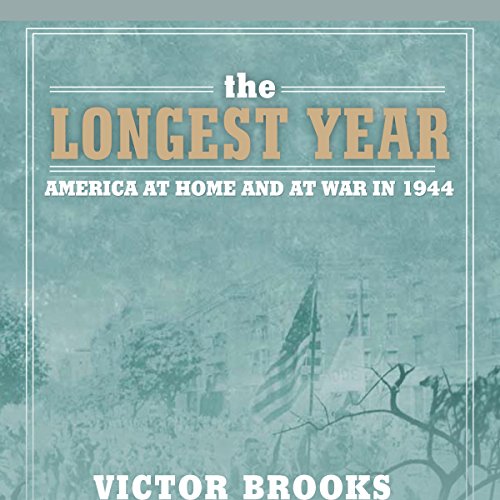 The D-Day invasion of Nazi-occupied Europe, launched on June 6, 1944, is widely referred to as the longest day of World War Two. Historian Victor Brooks argues that 1944 was, in effect, the longest year for Americans of that era both in terms of United States casualties and in deciding the outcome of war itself.

Brooks also argues that only the particular war events of 1944 could have produced the reshuffling of the cards of life that, in essence, changed the rules for most of the 140 million Americans in some fashion. Rather than focusing on military battles and strategy alone, the author chronicles the year as a microcosm of disparate military, political, and civilian events that came together to define a specific moment in time.

As war was raging in Europe, Americans on the home front continued to cope (with some prospering). As US forces launched an offensive against the Japanese in the Mariana Islands and Palau, folks at home enjoyed morale-boosting movies and songs such as To Have and Have Not and "G.I. Jive". And as American troops invaded the island of Leyte - launching the largest naval battle during the war - President Franklin D. Roosevelt and Thomas E. Dewey were in the home stretch leading up to the election of 1944.

It has been said that the arc of history is long. Throughout American history, however, some years have been truly momentous. This book makes the case that 1944 was one such year.