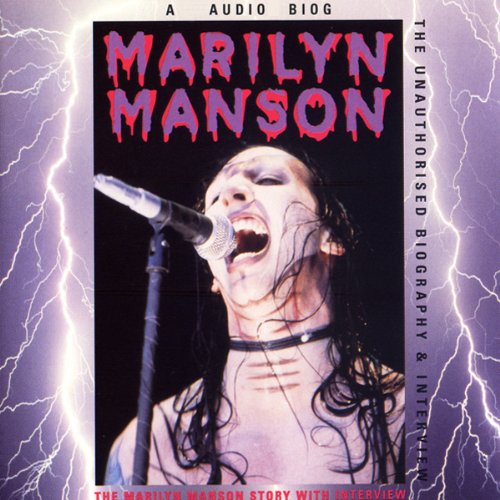 Marilyn Manson, Shock Rockers, and the most controversial rock band on the planet are taking on the world. They are anti heroes and their cult status has been enhanced by the press. They are the acclaimed Kings of Goth, which has its roots in the Shock Rock peddled by bands such as Alice Cooper and Kiss.

This is not a music release by the band or their record company, and sound quality may vary. In this audiobiog, we hear sensational Marilyn Manson as the classic rock and roll heroes, people who go against the grain.

Lead singer Manson is not the sinister person he is made out to be and he has an ethical code and strongly objects to anyone who brands him a Satanist. Despite the outrageous image of their comedy-of-goth circus, Manson's music is accessible. This unique and revealing interview is for every fan of goth or rock, and music buffs, collectors and music historians.

Marilyn Manson Story: A Rockview Audiobiography should prove interesting to fans who resent the demonization of rock stars. Marilyn Manson provokes the complacent and the self-righteous. The band’s name combines two American icons, one gorgeous and self-destructive, the other grotesque and violent. This double identity allows the band to protest shallowness and hubris through irony. Although they present like harbingers of doom, the band is an ethical institution. The music is oddly beautiful, and the message simmers with discontent. Lead singer Marilyn Manson has become a pop icon and a voice of conscience for those willing to look past his image. The band has retained its identity while enjoying longevity. Co-interviewers Pete Bruens and Jean Brun bring you this concise yet comprehensive audiobiography.