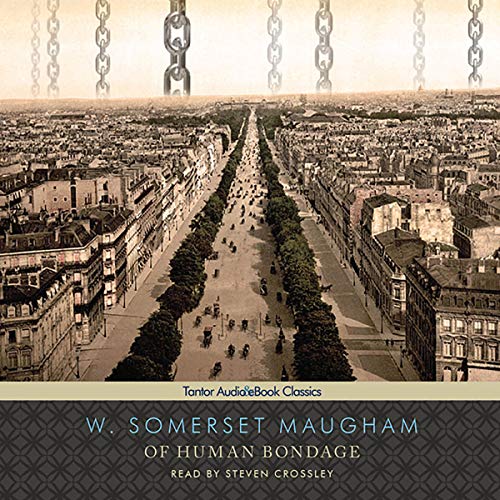 One of the most widely read novels of the 20th century, W. Somerset Maugham's masterpiece, Of Human Bondage, gives a harrowing depiction of unrequited love. Philip Carey, a sensitive orphan born with a clubfoot, finds himself in desperate need of passion and inspiration. He abandons his studies to travel, first to Heidelberg and then to Paris, where he nurses ambitions of becoming a great artist.

Philip's youthful idealism erodes, however, as he comes face-to-face with his own mediocrity and lack of impact on the world. After returning to London to study medicine, he becomes wildly infatuated with Mildred, a vulgar, tawdry waitress, and begins a doomed love affair that will change the course of his life.

First published in 1915, the semi-autobiographical Of Human Bondage combines the values left over from the Victorian era with the prevailing irony and despair of the early 20th century. Unsentimental yet bursting with deep feeling, Of Human Bondage remains Maugham's most complete statement of the importance of physical and spiritual liberty, a theme that resounds more loudly than ever today.