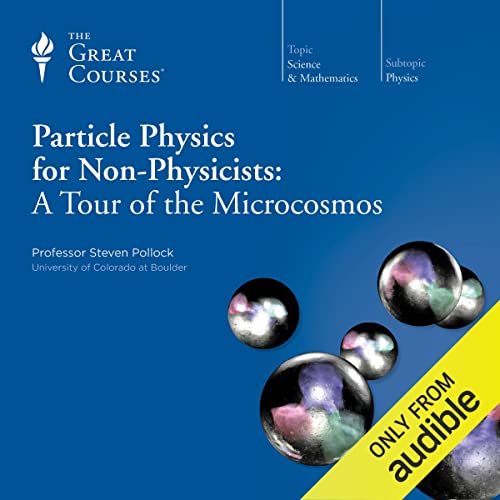 Particle Physics for Non-Physicists: A Tour of the Microcosmos

Would you like to know how the universe works? Scientists have been asking that question for a long time and have found that many of the answers can be found in the study of particle physics, the field that focuses on those impossibly tiny particles with unbelievably strange names - the hadrons and leptons, baryons and mesons, muons and gluons - so mystifying to the rest of us.

And now, in a fascinating and accessible series of 24 lectures, you can take the mystery out of the remarkable field that in only 100 years has unlocked the secrets of the basic forces of nature.

Professor Pollock will make you familiar with the fundamental particles that make up all matter, from the tiniest microbe to the sun and stars. And you'll also learn the "rules of the game" - the forces that drive those particles and the ways in which they interact - that underlie the workings of the universe.

The lectures have been designed to be enriching for everyone, regardless of scientific background or mathematical ability. Virtually all you'll need as you enter this fascinating world are your curiosity, common sense, and, as Professor Pollock notes, "an open mind for the occasional quantum weirdness." As you move through the lectures, you'll also gain a knowledge of how those particles fit into perhaps the greatest scientific theory of all time: the Standard Model of particle physics; a grasp of key terms like "gauge symmetry," "quantum chromodynamics," and "unified quantum field Theory;" and an appreciation of how particle physics fits in with other branches of physics - including cosmology and quantum mechanics - to create our overall understanding of nature.

Someone give this guy some important award please

If you are interested on what the reality is made of, just listen to the master Pollock. It doesn’t matter if you live in 2021 or in 2098, these fundamentals are here to stay, yes yes he didn’t know if the Higgs would be found, but who cares. He delivers really tough stuff in a very easy fashion. I’ve almost felt like I was clever! In all seriousness, grab this audible.