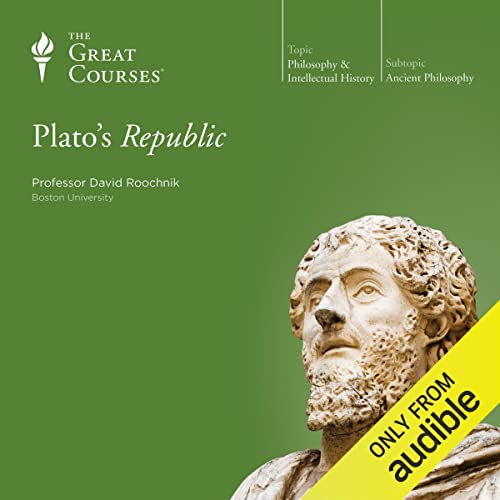 More than 2,000 years later, Plato's Republic remains astonishingly relevant to our everyday lives. It poses one question after another that might well have been drawn from the headlines and debates of our nation's recent history: What sort of person should rule the state? Are all citizens equal before the law? Should everyone have equal access to health care? Plato's greater inquiry, however, was into the question of defining justice itself and the reasons why a person would choose a life aligned with that virtue.

These 24 remarkable lectures lead you through the brilliant dialogue Plato crafted both to define and examine the issues with which political philosophy still grapples.

Chapter by chapter, Professor Roochnik introduces you to Plato's literary recasting of his own great teacher, Socrates, and the dialogue through which Socrates and the Republic's other characters create the hypothetical ideal city. It is by dissecting life in this presumably just city - the "Republic" of Plato's title - that the nature of justice itself can be examined.

Many of Plato's ideas will startle contemporary readers, who may recognize in them the foreshadowing of some of humankind's darkest moments. Indeed, some have called the Republic the "great-great-grandfather of all totalitarian experiments." You'll wrestle with Plato's controversial vision, and you'll be surprised just how contemporary these arguments sound.