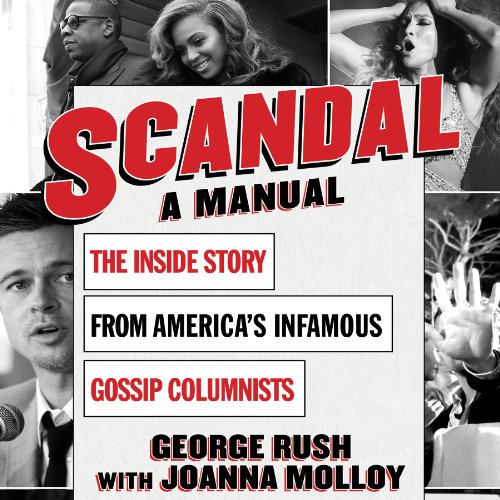 Over fifteen years of dirty secrets, shocking reveals, and all of the celebrity gossip that’s unfit to print . . . but we’re going to anyway. When Jay Z defended himself against unfair charges that he slapped a woman, when Yankee slugger Alex Rodriguez got tagged by an escort agency madam, when Bill O’Reilly dissed Muslim women, and when Ruth Madoff discovered her scam artist husband, Bernie, had also been cheating on her, it all came out in the pages of Rush & Molloy, the internationally syndicated entertainment column devoured by millions.

George Rush and Joanna Molloy are as dedicated to finding the juiciest scoops as they are to their long screwball romance. Together they’ve made some impressive enemies, turned down some bribes, become unlikely relationship counselors to famous star-crossed lovers, and witnessed the evolution of celebrity coverage from the twilight of Winchell to the dawn of Twitter.

Part love story, part tabloid, Scandal is a rollicking memoir of fame, gossip, and two true icons of print and web journalism. Rush and Molloy have exposed, unraveled, and reported some of Hollywood’s biggest rumors, blind items, and unbelievable stories. Still, over the years, the couple has kept a few salacious tales to themselves - that is, until now!

Guilty pleasures don't get much better than the work of gossip columnists Rush and Molloy. Hear them relate, in their own words and their own voices, a memoir of sorts, with plenty of juicy gossip dispersed throughout. With the requisite wit and dry sarcasm fans have come to expect the two drop secrets on the rich and famous, predicting that if they're ever found murdered a good place to start looking for blood is the heels of Sarah Jessica Parker. As you'll find out in this rollicking audiobook the list of suspects would go a long way from there.