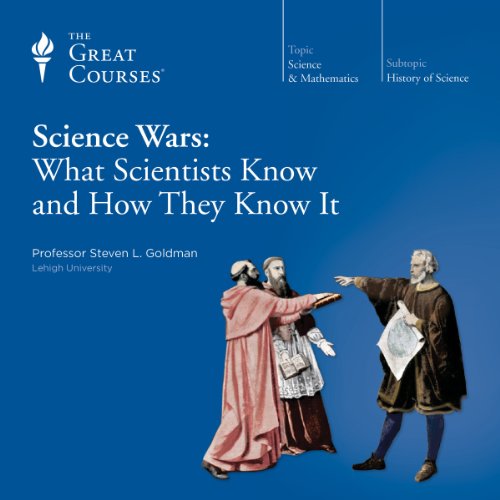 Science Wars: What Scientists Know and How They Know It

Choose one: (A) Science gives us objective knowledge of an independently existing reality, or (B) Scientific knowledge is always provisional and tells us nothing that is universal, necessary, or certain about the world.

Made your choice? Welcome to the science wars. This long-running battle over the status of scientific knowledge began in ancient Greece, raged furiously among scientists, social scientists, and humanists during the 1990s, and has reemerged in today's conflict between science and religion over issues like evolution.

This series of 24 lectures explores the history of competing conceptions of scientific knowledge and their implications for science and society, beginning with the onset of the Scientific Revolution in the 1600s up until today. It will provide you with an understanding of how science works that is as important as ever. Though it may seem that the accelerating pace of discoveries, inventions, and unexpected insights into nature over the centuries should secure foundations of scientific inquiry, that is far from true, as every day's headlines demonstrate.

By the end of these lectures, you will understand what science is, and you will be enlightened about a fascinating problem you might not even have known existed. "There have been a raft of popular books about what scientists know," says Professor Goldman, "but to the best of my knowledge, there is not a single one of these popular books that focuses centrally on the question of how scientists know what they know." These lectures are an answer to that critical need.

Lo que los oyentes dicen sobre Science Wars: What Scientists Know and How They Know It