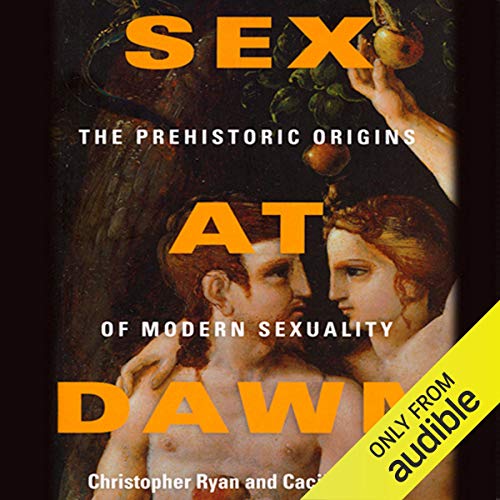 Since Darwin's day, we've been told that sexual monogamy comes naturally to our species. Mainstream science - as well as religious and cultural institutions - has maintained that men and women evolved in families in which a man's possessions and protection were exchanged for a woman's fertility and fidelity. But this narrative is collapsing. Fewer and fewer couples are getting married, and divorce rates keep climbing as adultery and flagging libido drag down even seemingly solid marriages.

How can reality be reconciled with the accepted narrative? It can't be, according to renegade thinkers Christopher Ryan and Cacilda Jetha. While debunking almost everything we "know" about sex, they offer a bold alternative explanation in this provocative and brilliant book.

Ryan and Jetha's central contention is that human beings evolved in egalitarian groups that shared food, child care, and, often, sexual partners. Weaving together convergent, frequently overlooked evidence from anthropology, archaeology, primatology, anatomy, and psychosexuality, the authors show how far from human nature monogamy really is. Human beings everywhere and in every era have confronted the same familiar, intimate situations in surprisingly different ways. The authors expose the ancient roots of human sexuality while pointing toward a more optimistic future illuminated by our innate capacities for love, cooperation, and generosity.

"A surprisingly non-titillating book about sex among prehistoric people makes for a terrific audio adaptation...With their straightforward approach, the narrators show professionalism and authority in this anthropological discussion of sex." ( AudioFile)
“ Sex at Dawn is the single most important book about human sexuality since Alfred Kinsey unleashed Sexual Behavior in the Human Male on the American public in 1948.” (Dan Savage)
"My favorite book of 2010...it's the only book I read this year that proved that I was badly mistaken about something." (Peter Sagal, host of NPR's Wait Wait... Don't Tell Me!)

In Sex at Dawn, husband and wife team Christopher Ryan and Cacilda Jethá have written a book that questions both modern-day standards of human sexual behavior and the scientific history of our early ancestors. The book first explains and defines what it refers to as “the standard narrative”, the story of how humans evolved from our prehistoric ancestors to be monogamous beings with conflicting biological imperatives for males and females. Then, it goes on to refute this narrative, providing evidence from noted modern scholars like Steven Pinker, Malcolm Gladwell, and Frans De Waal, as well as renowned scientists and philosophers like Charles Darwin, Jean-Jacques Rousseau, and Thomas Hobbes.

Ryan and Jethá write, “Science all too often grovels at the feet of the dominant cultural paradigm.” Indeed, one of the most powerful ideas that Sex at Dawn puts forth is that culture has a way of coloring scientific and historical “fact”. Some of the examples given are quite disturbing, especially when large institutions are clearly engaged in cover ups of our true nature. The authors assert that many sexual myths (for example, that masturbation is some kind of medical affliction) have been repeated and disseminated over the years by religious, health, and state organizations. They take a controversial stance that this “cover up” tactic has also been applied to the non-monogamy of our closest primate relatives and early man. They believe that even if non-monogamy is not the dominant mode of being for contemporary humans, at the very least it should be viewed as a historic basis for our desires and behaviors.

The narration, which alternates between Allyson Johnson and Jonathan Davis, is clear and straightforward, particularly well-suited to this kind of book. Johnson especially makes the information, which can sometimes be dense, easily digestible and relatable. One of the authors, Christopher Ryan, reads the preface, which gives a hint of how he came to be interested in exploring the given subject matter. Through this section, we also get a way to connect directly to the authors and thus, the human (as opposed to the scientific) aspect of the issues discussed.

To claim that this work is exclusively or even mostly about sexual behavior would be a stretch. The book is very holistic, tackling bigger-picture issues of science, culture, history, and philosophy. That said, these large ideas are needed as building blocks for the claims the authors make about sex. Another triumph of Sex at Dawn is the attention the authors have given to presenting material on sex as it applies to men and women equally. Along those lines, another high point of the narration is that it echoes this sentiment through the interchanging male and female voices, reminding us that these ideas apply to both sexes in different ways.

What the book posits exactly is somewhat unclear. The authors themselves admit that they're not exactly sure what to do with all the information they have unearthed. That said, the great strength of Sex at Dawn is that it opens the discourse about human sexual behavior sans many of the taboos that traditionally accompany the topic. —Gina Pensiero