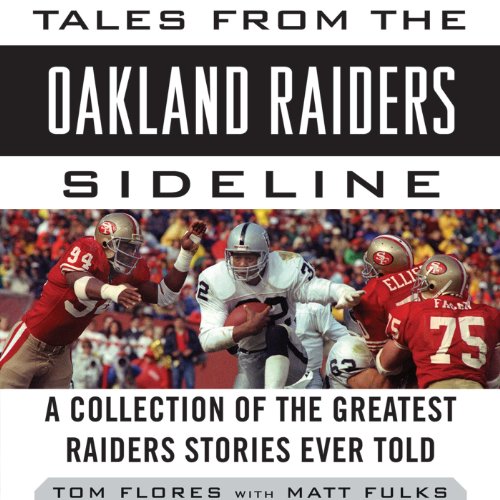 Tales from the Oakland Raiders Sideline

It’s almost impossible to talk about Oakland football without bringing up the name of the consummate Raider, Tom Flores. Legendary for both his skills on the field and his coaching guidance from the sideline, Flores has been an integral part of the Raiders organization since its inception in 1960. Now Flores shares the greatest stories and anecdotes from his time with the team in Tales from the Oakland Raiders Sideline. Flores relives the heart-stopping thrills and adrenaline-surging passion of Super Bowl XV and Super Bowl XVIII, and provides behind-the-scenes humor from greats such as former coach and owner Al Davis and coach Eddie Erdelatz. Flores also shares tales of other Raiders greats such as Billy Cannon, Jim Otto, John Matuszak, Bo Jackson, and more. Without a doubt this is a must-have for any Raiders fan.

Fans will agree that few can compete with Tom Flores for inside knowledge about the Oakland Raiders. First a quarterback for the team, then coach, and now a broadcaster, Flores has a wealth of stories about the team, which has tended to attract colorful eccentrics that would have trouble fitting in elsewhere. Gary Littman's upbeat performance embodies the iconoclasm and quirky charm of these players. Listeners will enjoy stories about characters like Ted Hendricks - whose pranks included riding a horse onto the field while holding a lance - delivered with a dose of good humor and "Can you believe that?" attitude by Littman.