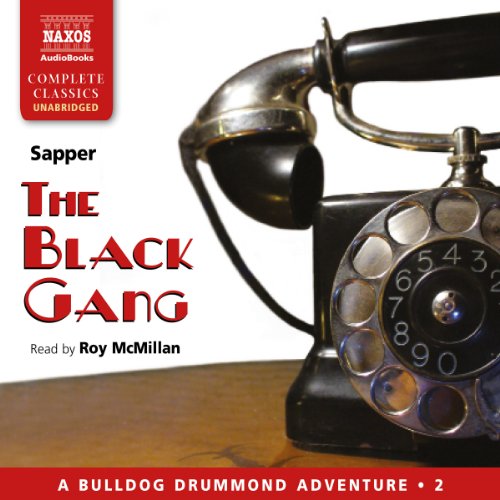 Bulldog's back! This time, there is a plot to foment a revolution in England, a plot that has left the Police baffled and the nation at the mercy of a master criminal. A disguised clergyman, a beautiful sidekick, an arcane poison, car chases and abductions all fail to see off Hugh Drummond and his gang of ex-Army friends. But when the plotters capture Drummond's wife, the game is up. Isn't it?

Undaunted, charming, brave and resourceful, Bulldog Drummond is an archetypal English adventure hero, and the forerunner of The Saint and James Bond.

Sapper’s vigilante hero Bulldog Drummond is back in this high-stakes thriller of corruption and criminality. The Black Gang, performed expertly by veteran narrator Roy McMillan, is the tension-filled tale that follows Drummond and his gang of ex-army friends as they try to do what the police have yet to do: foil the evil plans of Carl Peterson. Listen on as McMillian gives life to this classic crime novel from Sapper, and see if the Black Gang can manage to put a stop to Peterson and his henchman without getting in trouble with the police.