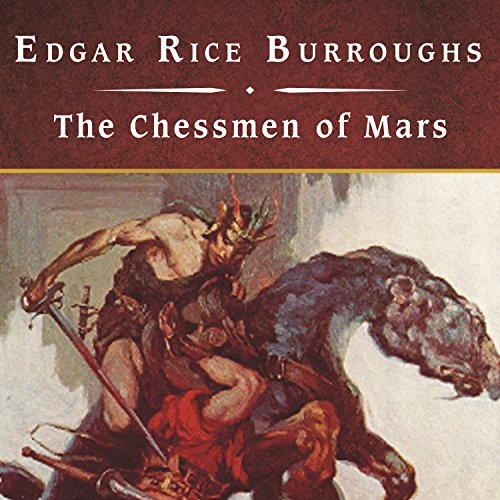 The Chessmen of Mars

Impetuous and headstrong, Tara, Princess of Helium and daughter of John Carter, defies the elements by flying into a rare, fierce Martian storm. Hurtled half a planet from her home, she is threatened by grotesque, flesh eating monsters and barbarous warriors. Is the mysterious Panthan warrior friend or foe? As hero battles for maiden in the chess-like games of Jetan, the pieces are fighting men and the stakes are life and death!

The fifth in Burroughs' 11-volume Mars series, a blend of sci-fi and romantic adventure.

In this fifth installment of Burroughs's Mars series, Tara, Princess of Helium, battles strange creatures in her effort to return to Kansas, or rather, Helium, after a vicious storm blows her into a strange new country. John Bolen gives each character in the intricate extraterrestrial thriller an accent from some country on Earth. But so strongly does he perform these that dialogue is often lost to human ears. His shrill, simpering female characters, admittedly few, all sound the same. These problems, combined with mispronounced words and oddly accented phrases, detract from the great story.