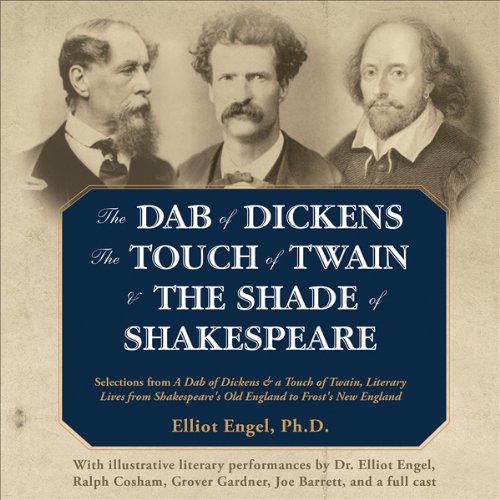 The Dab of Dickens, The Touch of Twain, and The Shade of Shakespeare

Selections from A Dab of Dickens, A Touch of Twain, Literary Lives from Shakespeare’s Old England to Frost’s New England by Elliot Engel, PhD, with Illustrative Literary Performances

They are icons of the literary world whose soaring works have been discussed and analyzed in countless classrooms, homes, and pubs. Yet for most readers, the living, breathing human beings behind the classics have remained unknown - until now. In this utterly captivating book, Dr. Elliot Engel, a leading authority on the lives of great authors, illuminates the fascinating and flawed members of literature’s elite. In lieu of stuffy biographical sketches, Engel provides fascinating anecdotes.

Elliot Engel has taught at the University of North Carolina, North Carolina State University, and Duke University. He earned his MA and PhD as a Woodrow Wilson Fellow at UCLA, where he won the Outstanding Teacher Award. He has written ten books, and his mini-lecture series on Charles Dickens ran on PBS stations around the country. His articles have appeared in numerous newspapers and national magazines, including Newsweek. He has lectured throughout the United States and on every continent.

Lo que los oyentes dicen sobre The Dab of Dickens, The Touch of Twain, and The Shade of Shakespeare