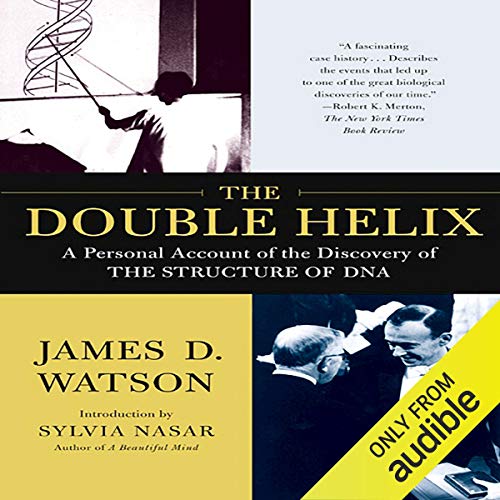 By identifying the structure of DNA, the molecule of life, Francis Crick and James Watson revolutionized biochemistry and won themselves a Nobel Prize. At the time, Watson was only 24, a young scientist hungry to make his mark. His uncompromisingly honest account of the heady days of their thrilling sprint against other world-class researchers to solve one of science's greatest mysteries gives a dazzlingly clear picture of a world of brilliant scientists with great gifts, very human ambitions, and bitter rivalries.

With humility unspoiled by false modesty, Watson relates his and Crick's desperate efforts to beat Linus Pauling to the Holy Grail of life sciences: the identification of the basic building block of life. Never has a scientist been so truthful in capturing in words the flavor of his work.

"A fascinating case history...Describes the events that led up to one of the great biological discoveries of our time." ( The New York Times Book Review)
"The history of a scientific endeavor, a true detective story that leaves the reader breathless from beginning to end." ( Scientific American)
"Watson's chronicle gives readers an idea of what living science is like, warts and all. The Double Helix is a startling window into the scientific method, full of insight and wit, and packed with the kind of science anecdotes that are told and retold in the halls of universities and laboratories everywhere. It's the stuff of legends." (Amazon.com review)

For most people, the discovery of the double-helix structure of DNA is the kind of ninth grade science fact you forgot as soon as the final was over. But the real story behind the breakthrough is a lot more interesting than trying to remember which of the bases pair up – and in The Double Helix, DNA-discoverer James D. Watson shares his memories of the find that earned him and his research partner, Francis Crick, a Nobel Prize.

The book, narrated almost entirely by Grover Gardner, traces the team's work on DNA at the Cavendish Laboratory in England in 1953, when Watson was in his early 20s. He and Crick raced frantically against other researchers – most notably Linus Pauling – in an effort to illuminate the structure of DNA, and thereby shed light on the genetics of all life. Watson doesn't shy away from using scientific terms, but Gardner's straightforward reading makes even the most complicated experiments easy to follow. And while the book's original release inspired controversy from scientists who didn't agree with Watson's version of events, Gardner gives Watson's voice all the excitement, passion, and dedication you'd expect from a young scientist on the verge of one of the world's greatest discoveries.

Roger Clark lends his elegant tenor to the book's afterward, written by Sir Lawrence Bragg --the youngest Nobel winner in history - who offers a scientist's take on Watson's memories. Bragg points out that The Double Helix is a record of "impressions, not facts" but he gets to the heart of what makes this memoir so appealing when he reminds us that few scientific books are as fresh and direct as Watson's – which is something your ninth grade science teacher would no doubt agree with. —Blythe Copeland