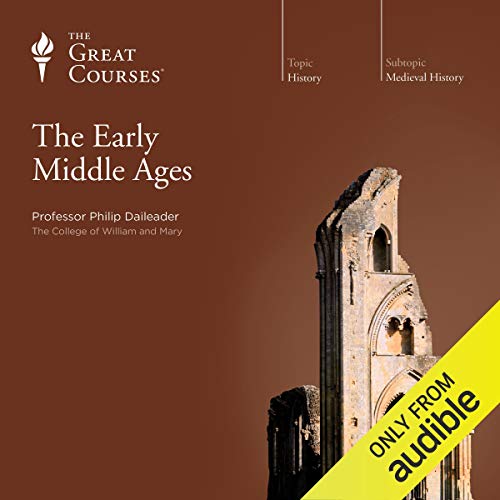 The Early Middle Ages - the years from A.D. 650 to 1000 - were crucial to Europe's future social and political development. These 24 lectures trace a journey from Scandinavia across northern and central Europe to the farthest reaches of the Byzantine and Islamic empires, providing an exciting new look an era often simply called the "Dark Ages."

Given the period's dismal reputation and its temporal remoteness from the 21st century, you'll be surprised to learn about some of the most challenging questions historians have ever had to tackle: Why did the Roman Empire fall? Why did the ancient world give way to the medieval world? Why did Christian monotheism become the dominant religion in Europe? You'll meet some of the era's exciting figures, such as St. Augustine and Justinian, and you'll consider the extent to which the historical realities of King Arthur and Charlemagne match up to the legends that have become attached to their names. You'll also look at the era's effect on the Vikings, the rise of the Carolingians, and the golden age of Islamic rule in Spain.

Professor Daileader also explores the contrasting historical theories offered by two extremely influential historians: Edward Gibbon, the English author of the monumental The History of the Decline and Fall of the Roman Empire, whose explanations closely followed those of the Roman moralists of the 4th and 5th centuries; and Henri Pirenne, the Belgian thinker who injected a newfound emphasis on social and especially economic factors into the analysis of history.

You'll see why the era belies its reputation as dark and dismal, but you'll come away with a new appreciation for this once-lost era.