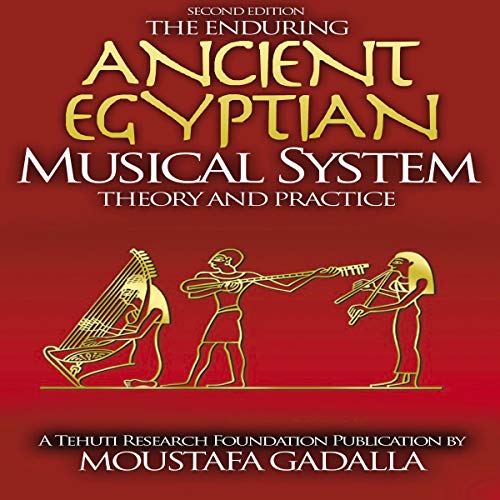 Discover the cosmic roots of Egyptian musical, vocal, and dancing rhythmic forms. Learn the fundamentals (theory and practice) of music in the typical Egyptian way: simple, coherent, and comprehensive. Review a detailed description of the major Egyptian musical instruments, playing techniques, functions, etc. Discover the Egyptian rhythmic practices in all aspects of their lives.

This book will make your heart sing. This expanded version of the book: The Enduring Ancient Egyptian Musical System is divided into seven parts containing a total of 22 chapters.

Part I: Prelude consists of one chapter: Chapter 1: The Egyptian Musical System will cover a quick background overview of the Egyptian musical system as evident in its archaeological findings.

Part II: The Harmony of the Spheres consists of four chapters - 2 through 5: Chapter 2: The Archetypal Cosmic Musical System will cover the basis and role of the harmony of the spheres in adopting the diatonic musical scale as the archetypal musical system. Chapter 3: Music All the Time (24 hours, seven days) will cover and explain the correlations between the hours of the days of the week and their corresponding musical notes. Chapter 4: Energizing the Diatonic Week will cover the natural musical scale, its two energy Centers, and the Egyptian Dorian D-scale. Chapter 5: The Harmonic Three Components will cover the primary basics of the Egyptian harmonic canon.

Part VI: Maintaining the Heavenly Rhythms consists of four chapters - 18 through 21: Chapter 18: The Universal Harmony will cover the role of music in maintaining the universal balance; etc., Chapter 19: Rhythmic Dancing will cover the significance of dancing as well as dancing types and formations. Chapter 20: The Harmonic Practices will cover the profession of musicians in Ancient (and present-day) Egypt; the temple musical activities; the applications of music in the various public activities. Chapter 21: The Harmonic Sound Man will cover the application of music in the various stages of human lives - from cradle to grave. Part VII: Postlude consists of one chapter - 22: Chapter 22: And the Beat Goes On will cover the endurance of the Ancient Egyptian musical traditions into present times. Appendices A through E provide expansions on some topics that were discussed in the various chapters.