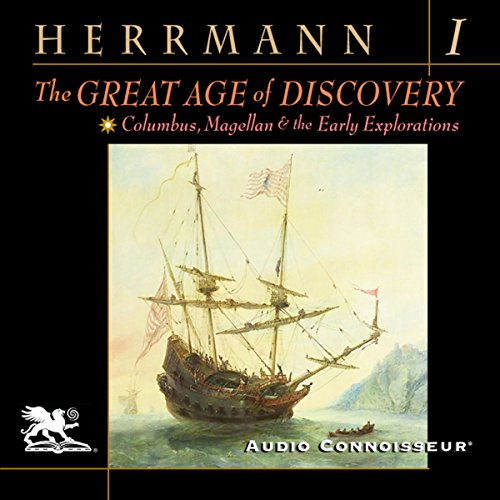 The Great Age of Discovery, Volume 1

In the space of 400 years, Western man methodically set out to explore and map the entire earth. During some of the most dangerous expeditions ever mounted, an extraordinary group of determined men forced passages through vast oceans, dark jungles, and withering deserts. Never has their like been seen since. What drove these soldiers, sailors, and civilians to leave the comforts of civilized life and face the horrors of shipwreck, starvation, cannibals, and disease?

The primary motivations were fame, fortune, and adventure...sometimes all three. But with some of these explorers there was also a sense of duty, the idea that it was their destiny to discover new lands, new trading routes, to further the prominence of their king and country, and to illuminate the dark corners of the planet to solve the geological riddles that had puzzled humanity for eons.

In Paul Herrmann's great synthesis of anthropology, archaeology, medicine, and wonderful narrative history, we discover the story behind the great expeditions. We learn how they were organized and carried out, what happened when Europeans confronted strange and often savage societies, and what happened to these explorers upon their return to Europe. We also learn what impact their discoveries had on primitive cultures and European society. But this history is also much more. The result is an unbelievable picture of mankind swept up in the dramatic passage from enforced isolation to a dynamic worldwide trading network.

Volume 1 follows the voyages of Columbus, da Gama, Magellan, Cortes, Pizarro, and others as the Western hemisphere is discovered and mapped. After Magellan's voyage, the world of trade takes a revolutionary turn and the fortunes of Europe and the Mediterranean are changed forever.