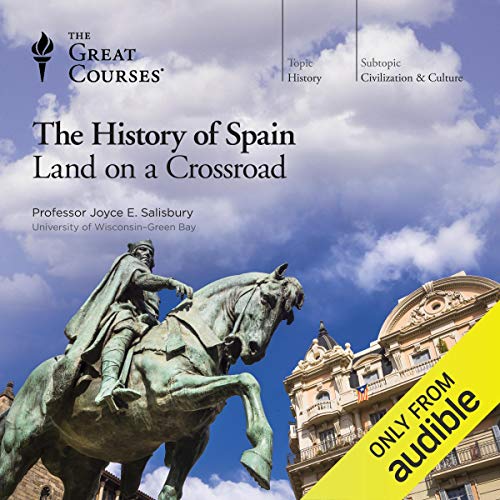 The History of Spain: Land on a Crossroad

Spain has played a unique and essential role in Western civilization. To understand the unfolding of Spain's epic history is to come to terms with one of the West's great cultures, and to grasp its enduring presence and impact on the world stage.

In these 24 accessible lectures, Professor Salisbury presents a broad and enthralling panorama of Spanish history, covering the centuries from the first prehistoric settlement of the peninsula to Spain's 20th-century civil war.

Linking one seminal era with the next, the course begins with how early Spain drew a range of peoples from ancient Africa, the Mediterranean, and the Middle East, who formed vibrant communities on the peninsula. From there, you'll witness the rule of the peninsula by both Rome and Visigothic peoples, leading to the spellbinding drama of Islamic Spain and the Reconquista, Catholic Spain and the Inquisition, and the opening of the New World. Finally, you'll travel into the kingly dynasties and the dazzling artistic heritage of the Habsburgs and Bourbons, and you'll track Spain's emergence into the modern world.

Together with the unfolding of Spanish history, Professor Salisbury illuminates Spain's iconic cultural forms - such as flamenco music and dance, and the ritual of bullfighting - and its phenomenal contributions to art, architecture, literature, music, theology, and learning.

Across the centuries, you'll explore jewels of Spanish architecture, from the resplendent Moorish Alhambra and Alcázar of Seville to the sublime Sagrada Familia cathedral of modernist Antoni Gaudí. And you'll encounter Spain's geniuses of the visual and written arts, including such masters as the painters Velasquez, el Greco, Goya, and Picasso, and writers from the philosophers Averroes and Maimonides to literary greats Lope de Vega and Cervantes.

Travel with us to this remarkable culture, and savor the beauty and the great human drama of the history of Spain.

PLEASE NOTE: When you purchase this title, the accompanying reference material will be available in your Library section along with the audio.