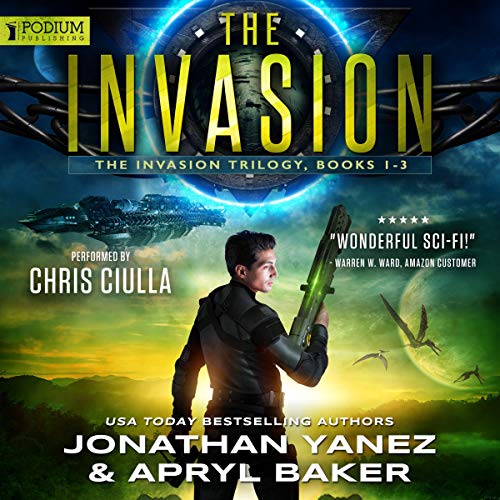 What should have been a relaxing hunting trip for Sergeant AJ Cole, his kid brother Remmy, and two Marines from his unit turns into an all-out brawl with enemies from another planet.

An invasion is being planned in the secluded woods of West Virginia. Ravagers from a distant world have set up a gateway, allowing them to move their forces through space. Earth is their next conquest. When push comes to shove, Earth's Marines are shoving back and taking the fight to the enemy. Outnumbered and outgunned, these Marines will look to each other for the will to go on. Allies will be found along the way, as well as a haunting prophecy for one of their own.

And the only hope of defeating the invading Sarkan Empire and saving Earth lies in a frozen wasteland of a planet far from Earth. Marine Space Corps Two have been given the mission of locating and securing the weapon that will enable Earth to defeat the Sarkans once and for all. Only to gain the weapon, they must first end a civil war and survive one of their own going rogue. The clock is ticking, and time is running out for Lieutenant AJ Cole. The fate of Earth rests in his hands.

The only hope for victory lies in Space Marine Corps Two’s youngest recruit - Remmy Cole. He is the Prophet and Gatekeeper foretold in an ancient prophecy. Aeon, the Sarkan Emperor, will do anything to get his hands on him. The conflict approaches, but Earth does not have the advantage. There is only one way to survive. Use the Emperor’s own tactics against him. Will Earth be forced to surrender, or will Remmy be able to use all the technological advances only his mind can control to win the fight for humanity?

Harness your courage and prepare to walk through the gateway.