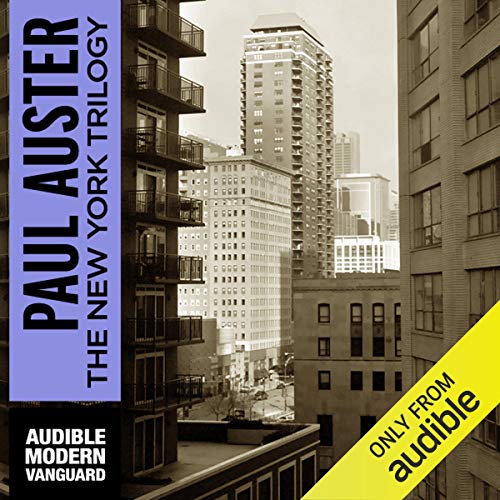 Paul Auster's brilliant debut novels, City of Glass, Ghosts, and The Locked Room brought him international acclaim for his creation of a new genre, mixing elements of the standard detective fiction and postmodern fiction.

City of Glass combines dark, Kafka-like humor with all the suspense of a Hitchcock film as a writer of detective stories becomes embroiled in a complex and puzzling series of events, beginning with a call from a stranger in the middle of the night asking for the author - Paul Auster - himself. Ghosts, the second volume of this interconnected trilogy, introduces Blue, a private detective hired to watch a man named Black, who, as he becomes intermeshed into a haunting and claustrophobic game of hide-and-seek, is lured into the very trap he has created.

The final volume, The Locked Room, also begins with a mystery, told this time in first-person narrative. The nameless hero journeys into the unknown as he attempts to reconstruct the past, which he has experienced almost as a dream. Together these three fictions lead the reader on adventures that expand the mind as they entertain.

As an added bonus, when you purchase our Audible Modern Vanguard production of Paul Auster's book, you'll also get an exclusive Jim Atlas interview that begins when the audiobook ends.

"Auster harnesses the inquiring spirit any reader brings to a mystery, redirecting it from the grubby search for a wrongdoer to the more rarified search for the self." ( New York Times Book Review)
"Eminently readable and mysterious.... Auster has added some new dimensions to modern literature and - more importantly even - to our perspectives on the planet." ( Boston Globe)
"By turning the mystery novel inside out, Auster may have initiated a whole new round of storytelling." ( The Village Voice)