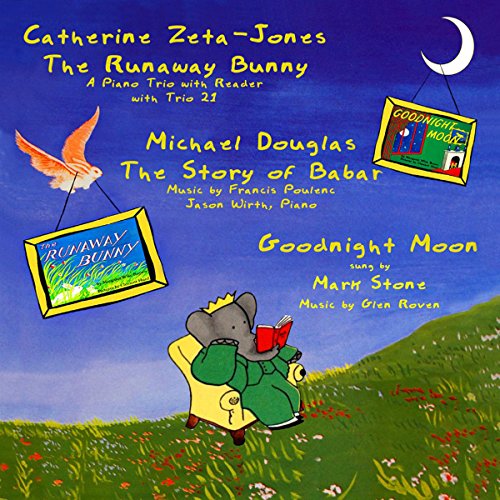 Runaway Bunny, The Story of Babar: The Little Elephant, and Goodnight Moon are national treasures and many of us remember them from our childhoods.

Catherine Zeta-Jones narrates The Runaway Bunny in a new piano-trio version composed by GPR Records artistic director and four-time Emmy Award Winner, Glen Roven. This piece premiered at Carnegie Hall with the American Symphony. Runaway Bunny was written in 1942 and has been published continuously since that time - it's a wonderful timeless story of free thinking and creativity.

Narrating the tale of one of the most famous elephants in the world Michael Douglas, a two-time Academy Award-winning actor and producer, tells the story of an orphan elephant who is befriended by a kind old lady, introduced to the pleasures of civilized life, then returns to the jungle and marries his childhood sweetheart and is elevated to King of the Elephants. The story of Babar, which celebrated its 81st Anniversary in 2012, includes music by Francis Poulenc and Jason Wirth on piano.

Also Goodnight Moon, a lullaby for baritone and piano, sung by international Opera superstar and English Baritone Mark Stone is based on Wise’s book of the same title, which has been in print for over 60 years.