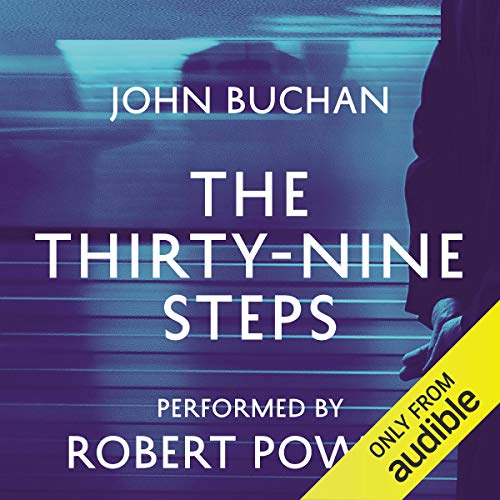 An espionage thriller that has been called the first great spy novel, it has sustained its popularity, being embraced by each new generation.

The first in a series of five audiobooks it features the spy Richard Hannay, an action hero with a stiff upper lip who gets caught up in a dangerous race against a plot by German spies to destroy the British war effort.

When Richard Hannay offers sanctuary to an American agent seeking his help in stopping a political assassination, he takes the first step on a trail of peril, murder, and espionage. Days later the agent's murdered body turns up in Hannay's flat, making him the prime suspect.

Knowing he's next he goes into hiding in Scotland, but in his possession is the American agent's little black book that holds the key to the conspiracy. On the run from both the police and members of a mysterious organisation that will stop at nothing to keep their secrets hidden, the book has become one of the most influential chase books, adopted by many, including Hollywood, but with an unrivalled tension.

The novel has been the basis for many adaptations although most have departed from the text. Most famous is Alfred Hitchcock's classic film The 39 Steps released in 1935.

Robert Powell received his first starring role in The Italian Job (1969) and is best known for the title role in the television series Jesus of Nazareth (1977). He received Best Actor awards for his performances in Imperativ (1982) and Harlequin (1980). His television career has included appearing in BBC One's Holby City (2005-2011) and the "science-fact" drama Doomwatch (1970) as well as starring alongside Jasper Carrott in the sitcom The Detectives (1993-1997). He has a distinctive voice that has narrated documentaries including World War II in HD Colour, Hitler's Bodyguard, The Story of the Third Reich and Secrets of World War II. In 2013 he narrated the dramatic television series The Bible. He has narrated many fictional and historical audiobooks including Rebecca's Tale, The Well-Beloved and The Thirty-Nine Steps.