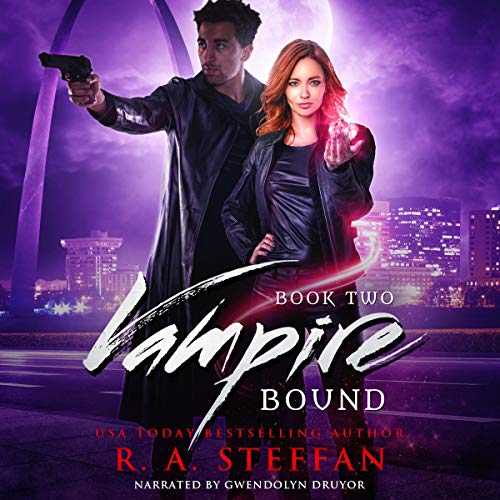 My son just vanished into thin air from a commercial jet cruising at 30,000 feet.

The forces that took him aren't of this world.

I've barely recovered from the revelations that my boss is a vampire and magic is real. Now, my child has been kidnapped by Fae who want to rule humanity, and I've acquired powers I can't control.

Blowing doors off their hinges and starting fires with the power of my mind won't help me find Jace. For that, I'll have to trust a man - a vampire - with emotional walls as tall and thick as Fort Knox.

The answers I need won't be found on Earth, but to save my son, I'm ready to brave a realm that drives humans mad. I've been set adrift in a terrifying new world of monsters and magic. Adrift, but not alone. Somehow, I've gained a misfit family among the living and undead.

Just as well, because at this rate, it looks like I'm going to need them.

Vampire Bound is a new urban fantasy romance series by R.A. Steffan, set in the same world as the best-selling series The Last Vampire. Get the second book today and enter a world shared by humans, fae, demons, and vampires. It’s a place where the supernatural threatens the mundane, nothing is as it seems, and love will either be the world’s downfall or its salvation.