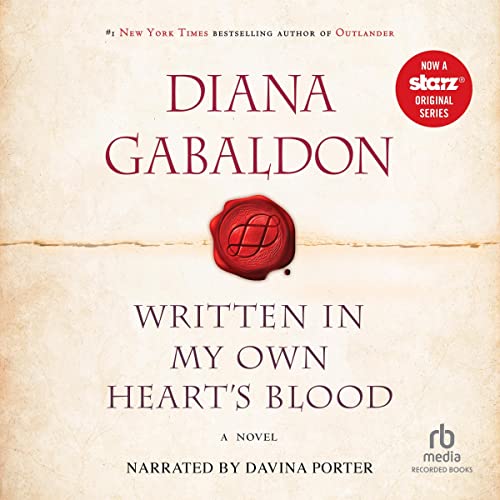 Written in My Own Heart's Blood

In her now classic novel Outlander, Diana Gabaldon told the story of Claire Randall, an English ex-combat nurse who walks through a stone circle in the Scottish Highlands in 1946, and disappears… into 1743. The story unfolded from there in seven best-selling novels, and CNN has called it "a grand adventure written on a canvas that probes the heart, weighs the soul and measures the human spirit across [centuries]." Now the story continues in Written in My Own Heart's Blood.

It is 1778: France declares war on Great Britain, the British army leaves Philadelphia, and George Washington's troops leave Valley Forge in pursuit. At this moment, Jamie Fraser returns from a presumed watery grave to discover that his best friend has married his wife; his illegitimate son has discovered (to his horror) who his father really is; and his beloved nephew, Ian, wants to marry a Quaker. Meanwhile, Jamie's wife, Claire, and his sister, Jenny, are busy picking up the pieces.

The Frasers can only be thankful that their daughter Brianna and her family are safe in 20th-century Scotland. Or not. In fact, Brianna is searching for her own son, who was kidnapped by a man determined to learn her family's secrets. Her husband, Roger, has ventured into the past in search of the missing boy - never suspecting that the object of his quest has not left the present. Now, with Roger out of the way, the kidnapper can focus on his true target: Brianna herself.

Written in My Own Heart's Blood is the brilliant next chapter in a masterpiece of the imagination unlike any other.