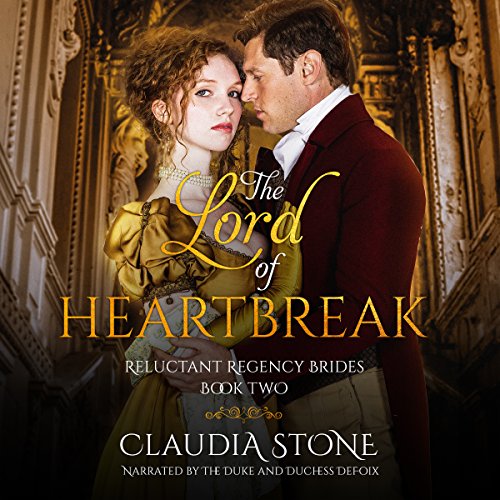 The Lord of Heartbreak

Miss Jane Deveraux is in a bind; her brother, Viscount Jarvis, has married and his new wife does not want her bookish sister-in-law encroaching on their wedded bliss. The Viscountess makes it very clear that Jane must find a husband, but the confirmed spinster doesn’t have many suitors lining up to claim her hand.

What Jane needs is a large sum of money, so that she can buy the local boarding house, and live out her days holding intellectual saloons for the egalitarian set. Though where she’ll find this money is anyone’s guess…

James Fairweather, Lord Payne is the heir to the Ducal seat of Hawkfield. Tall, handsome, and with a roguish charm that has women falling at his feet, he should be living the easy life of an entitled bachelor. The only problem is that his father has tired of his rakish ways and declares that unless Payne cleans up his act he will be disinherited. What Payne needs is a respectable - dare he say boring - woman that he can parade around for a season to convince his father that he has changed his ways. The only person who fits the bill is his friend’s sister, Jane, who reluctantly agrees to go along with the charade - for a price, of course. Though when the Lord of Heartbreak finds himself falling in love with the clever, bookish young woman, he realizes that he’s very much so at risk of having his own heart broken.

This sweet, regency comes with a guaranteed happily ever after and can be read as part of the series or as a stand-alone novel.